Senator Frederica Wilson's 5000 Role Models Program got some positive press from columnist Leonard Pitts in this morning's Miami Herald. Several thousand young men have completed the program since Wilson started it fourteen years ago. These are the young men we need to hear more about. Senator Wilson and her staff, the role models and mentors are to be commended. When the village comes together, the village always wins. --- Blogging Black Miami

`I sure hope Timothy doesn't come to school today.''

It was when that thought came to mind, says Frederica Wilson, surveying the faces at the conference table in the Miami-Dade County Public Schools headquarters, that she knew she had a problem. After all, she was a school principal, a black woman. And Timothy was a student, a black boy. But Timothy was also a terror and as she drove to school, she found herself hoping he wouldn't be there.

The thought shocked her. If she dreaded Timothy, she says, how must her Hispanic and white teachers have felt about him? And why was it every time she held a disciplinary conference, it was for a black boy? Why were they the ones who always seemed to be in trouble? [MORE]

Umoja Village residents, organizers and supporters are ticked with City of Miami Commisioner Michelle Spence-Jones. See the message below.

Take Back the Land is calling on supporters to attend the city of Miami Commission meeting on Thursday, July 26, 2007, beginning at 3:00pm. Miami City Hall is located at 3500 Pan-American Drive, in Coconut Grove. At the meeting, the Commission will vote on the fate of the Umoja Village Shantytown's land.

Following the tragic fire which destroyed the Umoja Village, Miami Commissioner Spence-Jones contacted Umoja Village, met with organizer Max Rameau and resident John Cata, and offered direct conveyance of the land, without a bid process. She also agreed to provide immediate housing for former Umoja residents, and the deal was reported in the Miami Herald and Miami Times.

After intense debate, we called off our planned protests and accepted the offer. We met with potential partners and crafted a proposal, which we submitted to Spence-Jones, as agreed, and tried to confirm the item for the July 26th Commission meeting.

Instead, Spence-Jones unilaterally and without explanation, nixed the deal and put the lot out to bid. Miami's bid process is notoriously rigged and corrupt, as often reported in the media, giving politically connected developers the inside track to use this public land for a gentrification project.

This is the same kind of double dealing which got us into this mess in the first place. Umoja was a tremendous victory for this community, and will not be swept under the rug.

Show your support for Umoja by attending this meeting and demanding elected officials live up to their commitments and convey the land directly to the residents and organizers of the Umoja Village. If officials are able to continue to lie to us and get away with it, we will be forced to resort to more drastic measures to house people ourselves.

Max Rameau
Take Back the Land
a project of the Center for Pan-African Development
www.TakeBacktheLand.net 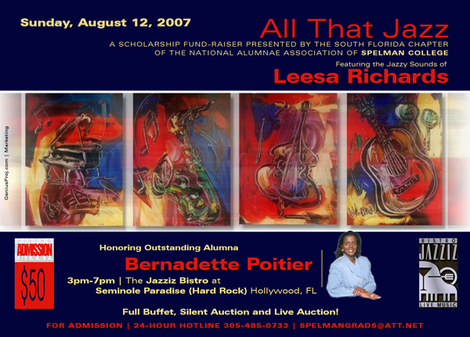 ALL THAT JAZZ:  SCHOLARSHIP FUND-RAISER

Visit www.sfnaasc.org for scenes from All That Jazz 2006

THANKS FOR YOUR SUPPORT & STAY JAZZY!!

Miami Northwestern Senior High School better known as "The West", has been the center of community discord for the last few days. A consensual but illegal sex act of a 14 year-old female student by star football player, Antwain Easterling, has been the impetus for the discord. Miami Northwestern alumni, students and community supporters were alerted to Miami-Dade Schools Superintendent Rudy Crew's contemplation of suspending the football program. What happened next was a perfect example of what's right and what's wrong in society.

Without succumbing to obstacles of a lack of financial resources and limited time, hundreds of Miami Northwestern alumni mobilized to attend yesterday's school board meeting. Superintendent Crew wisely said the program would continue however his stipulation that the football program is on probation for a year and that the current coaching staff is fired was received with mixed emotions --- current football players walked out. Crew also said the players should be required to maintain a 2.5 GPA, not the current 2.0 to participate in the athletic program.

The fallout from the superintendent's decision is interesting. Superintendent Crew is either praised or vilified for his resolution to the Northwestern situation. Read the comments over on the Miami Herald site.

The imbalance in the athletic program overshadowing the football program is definitely not unique to Northwestern; it is a reflection of our society. Our children need to be re-claimed and there will be some collateral damage along the way. Unfortunately, that is the reality of effecting change. Someone will always be dissatisfied in situations such as this.

It's also important to remember that the investigation of the Miami Northwestern sex scandal issue is not closed. The grand jury report was released and former principal Dwight Bernard was arrested but it's not over. Allegedly, athletic director Gregory Killings was forced to resign and now the football coaching staff gets the ax. Anyone who's seen the infamous documentary, Year of the Bull, will wonder why disciplinary action wasn't taken earlier.

Sadly, it takes controversial issues such as this to force Miami Northwestern alumni, parents and students to take appropriate action. Such response, in large numbers, must be the norm for Miami Northwestern. Folks that say they love the school must be proactive. Folks who claim to love those students must remember that love is an action word.

What folks in other parts of the U.S. are saying…

Miami school wins on field, ethical bearings off it

Mark your calendars for the meetings below. Please try to attend. It may be a personal sacrifice but we must get involved --- be visible and knowledgable about County Government. The same is true for the City of Miami and other municipalities.

Who are the task force members?

What is the objective and status of this committee?

Is an agenda available online? 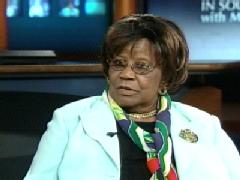 It’s taken awhile for me to post to this blog because of technical difficulties. It’s also been a little uncomfortable to post about people I know personally endure uncomfortable circumstances.  That being said, here goes.

With all of the hoopla about the Miami Herald’s investigative series on the Poinciana bio-pharmaceutical park debacle, it was really difficult to watch Former Congresswoman Carrie P. Meek on This Week in South Florida with Michael Putney. Her anger was apparent as for the first time ever she has been criticized publicly and forced to defend her actions. She attempted to salvage her reputation and that of her son, Congressman Kendrick Meek, also.

As to be expected, the Congresswoman had a few choice words for The Miami Herald. She indicated that The Herald made the article more about her and her son than developer Dennis Stackhouse. Based on comments to articles about this situation, it may not be as easy for the Meeks to distance themselves for this issue. If the Herald lied in its reporting, at least one of the people targeted should seek legal recovery for damages to their reputation --- Yes, sue!

On the other hand, if there charges to be filed, the citizens of Miami-Dade County fully expect State Attorney Kathy Fernandez-Rundle to have some folks hauled It will likely be the folks considered collateral damage but some effort made nonetheless.

On the surface, this issue appears to be about corrupt politicians. Look past the surface at the tipping point of change in or eradication of Black political power in the largest county in Florida. This Poinciana issue, on the heels of the Herald’s “House of Lies” investigative series and other local scandals, several folks have some ‘splaining to do.

Most important is the clear message of accountability that must reverberate within each voter now and in the next election. The political dynamics must change. While politicians and government officials are pointing fingers at each other about this latest issue, they must also be reminded that they work for us --- the citizens. We must become more involved in government at all levels. We have allowed our votes to be taken for granted and our community to be neglected and we have largely been silent. It’s simple ---If we keep doing what we’re doing, we’ll keep getting what we got.

It’s time for a change and it starts with each of us.