As time marches on and progress made, crucial to the quality of life for Blacks in Miami is a knowledge, appreciation and respect for the sacrifice and accomplishments of the people who came before us and shaped the history and landscape of the community we enjoy today.

Many know of Overtown with it’s once bustling businesses but few know of the area in Allapattah called Railroad Shop. Check out the Miami Herald article on Railroad Shop. Be sure to read the article and share the information with your children. 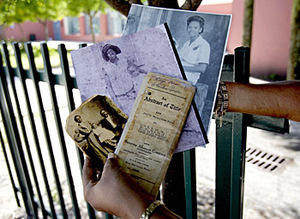 Georgia Ayers, who grew up in the Railroad Shop Colored Addition, holds some memorabilia -- family and friends photos, and an Abstract of Title to the property the family inhabited -- from before their eviction 60 years ago.

With the knock on the door of their modest home in Railroad Shop Colored Addition, a sense of dread overcame Deloris Johnson, her younger sister and her mother. They had two hours to move out.

A block or so away, James Bendross saw what was happening at the Johnsons' home. He and other boys home from school for the summer helped move belongings from neighbors' homes.

In North Carolina, Georgia Jones got word that her grandmother, Eliza Pierce, was forcibly removed from the home her family built in 1918.

Aug. 1, 1947, is forever seared in Jones' mind. On that steamy day, white police officers ordered 35 black families to leave Railroad Shop Colored Addition -- land that the Dade School Board wanted for a school, with room for the city of Miami to build a park for the white neighborhoods surrounding Railroad Shop.

At the time, most news organizations, including The Miami Herald, largely ignored the ramifications of what was happening -- except for the black newspapers of that day. Today, those who lived through the ordeal want future generations to know what happened to the area now known as Allapattah. They are pushing to have a middle school and streets renamed to reflect Railroad Shop's proud history.

It ended with the cruelest of ironies, when rain fell the night of the evictions, and many residents lost their possessions.

Some of the police officers apparently found their task distasteful. A Miami News article quoted an unidentified officer at the scene: ``I wish I wasn't a cop today.''

Sixty years ago, the residents fought back against the government's condemnation of their property, hiring a black attorney to take on a white City Hall and School Board. In July 1947, a judge gave the nod for ``immediate possession of the property.''

Two years later, the remaining homes were taken by the city to build a park and a fire station.

Families were offered about $150 per lot from the government, although several families negotiated for more. Pierce received $4,500 for a five-room home and eight lots that were filled with mango and avocado trees. Those who wanted to keep their homes had to pay the county for moving the houses to another lot. The few who could pay moved their houses to other parts of Miami or to the Carver Ranches section of Broward County. [Continued…]