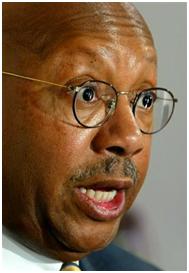 The Bush administration's top housing official, under criminal investigation and intense pressure from Democratic critics, announced Monday he is quitting.

Housing and Urban Development Secretary Alphonso Jackson said his resignation will take effect on April 18. The move comes at a shaky time for the economy and the Bush administration, as the housing industry's crisis has imperiled the nation's credit markets and led to a major economic slowdown.

Jackson, 62, has been fending off allegations of cronyism and favoritism involving HUD contractors for the past two years. The FBI has been examining the ties between Jackson and a friend who was paid $392,000 by Jackson's department as a construction manager in New Orleans after Hurricane Katrina.

The HUD chief made no direct mention of that in his resignation statement. Explaining his move, he said: "There comes a time when one must attend more diligently to personal and family matters. Now is such a time for me."

He did not take questions or elaborate on the family reasons he cited for the decision. The group in the room applauded and Jackson left the room.

Jackson has a friendship with President Bush that dates to the late 1980s, when they lived in the same Dallas neighborhood. He was the first black leader of the housing authority in Dallas and president of American Electric Power-TEXAS in Austin.

On Monday, Jackson said he has spent more than 30 years of his life improving housing opportunities for all Americans regardless of income or race.

"My life's work has been to build better communities that families are proud to call home," the embattled housing director said.

Jackson said he is staying on three more weeks to ensure an orderly transition of the leadership of HUD.

His statement offered an upbeat review of his own record.

He said he and his team at the housing agency had helped families keep their homes, reduced chronic homelessness and "transformed public housing."