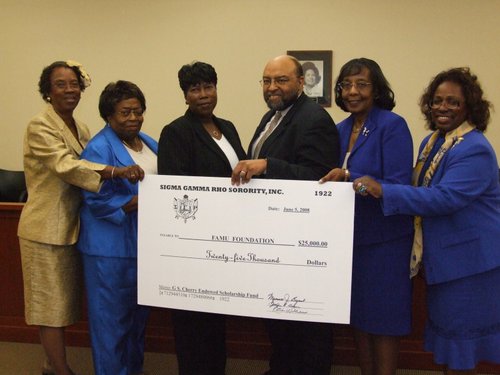 Culminating a project that began eight years ago, the Florida A&M University College of Law and members of Sigma Gamma Rho Sorority, Incorporated, co-hosted the Gwendolyn Sawyer Cherry, Esquire Lecture Hall Dedication and Endowed Scholarship Fund Presentation at the school, naming a moot courtroom for the law school alumna, who was also an active member and legal advisor for the sorority.

The event also featured a $1,000 contribution from Sigma Gamma Rho Sorority, Inc., and a $10,000 donation from BlueCross and BlueShield of Florida, which increased the Gwendolyn Sawyer Cherry Scholarship Endowment to $25,000. More than 100 guests participated, including members of Sigma Gamma Rho Sorority, Inc. from across the country. Reginald McGill, on behalf of Orlando Mayor Buddy Dyer and the Orlando City Council, presented Bryant with the key to the city in recognition of the event.

Located on the 2nd floor of the four-story law school, the Gwendolyn Sawyer Cherry, Esquire Lecture Hall is a popular classroom at the FAMU College of Law. In addition to being used for legal curriculum, the room serves as a small moot courtroom where students practice for moot court or mock trial competitions.

Cherry died in an automobile accident while in Tallahassee, Fla. in February 1979. Former state governor and U.S. Senator Bob Graham called her “a champion for the rights of all people and a voice of reason and concern” when he delivered her eulogy. She was honored posthumously in the State of Florida’s Women’s Hall of Fame in 1986.

The FAMU College of Law was founded in 1949 on the main campus in Tallahassee. After graduating 57 lawyers, the law school was closed by the state of Florida in 1968. The Florida Legislature voted to reopen the law school in 2000 and Orlando was selected as the location. The reestablished FAMU College of Law opened its doors in 2002 and is now housed in a state-of-the-art facility at 201 Beggs Avenue in downtown Orlando’s Parramore neighborhood.