Blogging Black Miami
Dolphins win!
Too Many People to Breathe

Today is day four of Kwanzaa, Ujamaa [Oo-jah-mah], cooperative economics. When we practice Ujamaa, we build and maintain our own stores, shops and other businesses and profit from them together.

How can one not recognize the benefit in this principle? When a community establishes a strong economic foundation, its residents are likely to be greater participants in shaping the agenda for other areas that govern their lives such as education and politics.

Locally, there is evidence of the power of cooperative economics if you travel any main street in Miami-Dade County. In particular, check out Hialeah, Doral, or West Miami. I could name others but my point is that the number of Hispanic-owned businesses and Hispanics in business correlates to the power and influence of Hispancs in government, education, etc.

Cooperative economics is at the heart of that progress. It's not rocket science and doesn't take a genius to understand what needs to be done to replicate that success in the black community. Support black businesses.

Indulge me in sharing a brief but true story. I recall meeting with some black state legislators several years ago while lobbying for funding to re-establish the Florida A&M University School of Law. One of the legislators, from north Florida, spoke of how he had been in Miami with one of his Cuban colleagues during an earlier visit and they needed something from the grocery store. Rather than stop at the nearest Publix or Winn-Dixie, they ended up shopping at Sedano's Supermarket and paying more for the items than they would have at one of the larger food chain stores.

This occured at least15 or 16 years ago when there was probably one, definitely no more than two local Sedano's stores. Now, there are probably close to 30 Sedano's stores. It's not rocket science, folks, but it does require sacrifice. Sedano's didn't start out as a fancy store but through hard work and sacrifice of the owners and their customers...30 stores...jobs for their community...it's real simple. We could talk about Eldorado Furniture and Navarro Pharmacy also but I think you get the picture.

There's a flip side to this also and that's the expectation of delivering excellent customer service and a quality product. Black businesses tend to have problems raising capital, and current economic conditions make that even more difficult but they don't get a pass on customer service and shoddy workmanship.

Also important is the need for black leadership in the black community that will drive an agenda for the black collective rather than for themselves. Too many opportunities for improvement in the black community have been squandered while others have been and continue to be smothered but let me not go there right now; I'll deal with that in another post about what I call Black on Black crime.

Some folks consciously or sub-consciously send a message that blacks are not good entrepreneurs and many of us buy into that otherwise this post would have no merit but it does. Let's never forget the successful black-owned businesses in Overtown and the damage inflicted upon the black community after the construction of I-95.

It's nothing new that when the rest of the world has a cold, black people have pneumonia. We are accustomed to dealing with adversity. We are survivors. It's almost 2009, it's time to stop just surviving and start thriving. Habar gani! 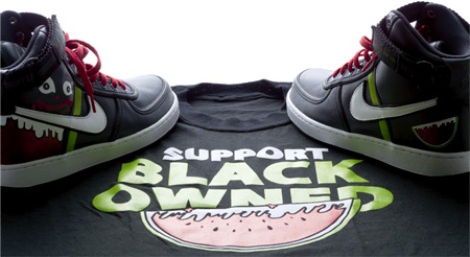