I was reminded that I hadn’t been around for about three months when I pulled into to get my car cleaned at Karma Car Wash. I didn’t think it had been that long but I guess it has. Between work and other obligations that’s likely a fair estimate of my absence.

I think it would be fair to blame my absence on Barack Obama. Yeah, it’s that guy’s fault. I’d been so consumed with his campaign and the presidential election that I put a lot of things on the backburner. Anyhoo, I think the neglect was worth it to help bring the change we need to this nation but back to Karma.

I noticed that something was a little different but I couldn’t put my finger on it. For starters, I had to pay for my car outside rather than in the café’. OK. It’s still early in the morning, I haven’t been here for awhile, this is no time to start an argument.

I’d had a mimosa on my mind since yesterday so I headed to the café’. There was a “Metro Bistro” logo on the door. My how things have changed. Wow, the interior furnishings were gone and replaced by a gorgeous and bar that I clearly felt underdressed for.

David Tunnell, one of the owners, greeted me warmly, immediately sensed my bewilderment, and explained that they were now a full-fledged restaurant and the car wash operation was separate from the restaurant operation.

Servers in crisp calming blue shirts and white aprons had replaced the cool Jamaican chick with the head wrap. Did I mention the flat screen television?  David explained that the restaurant opened at 11 but he did oblige me with the mimosa. 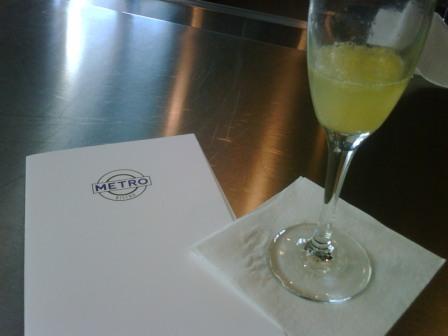 Unfortunately, I didn’t get the chance to try any of the entrees. On my next visit I’ll try the Metro Salad and perhaps the Portabella Panini although I’m not a fan of mushrooms. There’s something for everyone with their Mahi-mahi sandwich, New York Strip, Pork chop, Lamb T-bones and extensive wine offerings.

My car was cleaned quickly so I’m out. Upon leaving, I met another of thee friendly owners, Fernando Nascimendo from Brazil. Check this space next week and I’ll give you my review of the food. 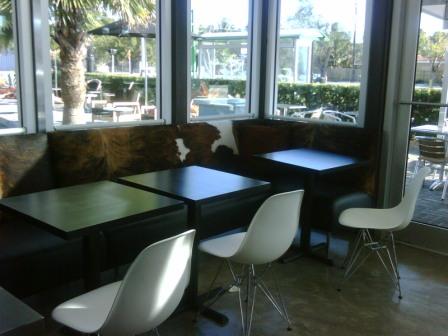