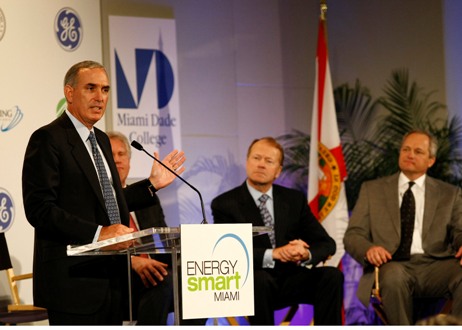 MDC, long hailed as a leader in environmental awareness and training, will serve as the training arm of the partnership and also be the recipient of solar power installations and use of "plug-in hybrid electric vehicles."

Energy Smart Miami would help Miami-Dade County consumers save money by giving them more choices over how they consume and conserve electrical power. It would also generate near-term demand for "green collar jobs" to support its implementation, while further solidifying Miami's national leadership in championing the responsible environmental practices needed to address the longer-term challenge of addressing climate change, which poses a significant threat to Florida and its coastal regions.

Energy Smart Miami has the potential to be the most extensive and holistic Smart Grid implementation in the country. The backbone of Energy Smart Miami will be the deployment of more than 1 million advanced wireless "Smart Meters" to every home and most businesses in Miami-Dade County. These meters will give Florida Power & Light Company (FPL) customers more information and control over their electricity usage while also providing FPL with information that will enhance system efficiency and reliability. Implementation of the Smart Meters will be based on open network architecture, allowing other providers to develop and deploy new applications that could, for example, help consumers better manage the electricity usage of their air conditioning and appliances.

"The Energy Smart Miami Initiative is an investment in the future of our city, our residents and our neighborhoods, and is an important step toward creating the green jobs of the future and building a clean energy economy," Mayor Diaz said. "This initiative will contribute to the Obama administration's goals of investing in alternative and renewable energy, ending our addiction to foreign oil, addressing the global climate crisis and creating millions of new green jobs. I look forward to working with our partners in the private sector to create a model of putting the economic stimulus plan in action and breaking ground right away."

The project's sponsors are proud to have the support of South Florida native Carol Browner, the former Environmental Protection Agency Administrator who now serves as President Barack Obama's point person on energy and climate change and U.S. Representative Kendrick Meek of Miami, among others. Browner is an MDC alumna.

"With the Recovery Act, President Obama demonstrated his commitment to developing a bigger, smarter, stronger electric grid that will not only reduce our energy costs but also reduce our energy use," Browner said. "There's no time to waste. It's time for action. I commend Mayor Diaz for creating a plan that will put these recovery dollars to work and make Miami a Smart Grid model for cities across our country. With projects like Energy Smart Miami, we can stimulate the economy today and build a brighter, cleaner tomorrow. It's truly a win-win for Miami and for America."

"The benefits of the federal stimulus are two fold here in Florida; it will help revive our state's economy by assisting families who are facing unprecedented financial challenges. It will also lay the foundation for a more prosperous future," Meek said. "By investing economic stimulus funds in Smart Grid technology, Energy Smart Miami is breaking new ground. Miami-Dade County consumers will be equipped with information that can ultimately help them save money while also giving them more control over their electricity usage."

Florida Power & Light Company, a subsidiary of FPL Group and the nation's No. 1 utility in energy efficiency programs, is leading the strategy and deployment of Smart Grid technologies for the project. Florida Power & Light provides electricity to 4.5 million customer accounts in the state of Florida, including more than 1 million in Miami-Dade County. GE, a world leader in power generation, distribution, and management technology, will supply key components of the project, which include Smart Meters and may extend to advanced applications and smarter control systems. Silver Spring Networks, a leading provider of networking solutions for the electric grid, will provide field proven, open standards-based, secure wireless network communications. Cisco, the worldwide leader in networking technologies, will help design and implement a secure and intelligent communications platform within the county's transmission and distribution grid and provide customers with home energy management information and controls.

"Through Energy Smart Miami, FPL will significantly accelerate and expand our capital investment program to help Miami-Dade County customers more quickly realize the benefits of an intelligent electrical infrastructure. The City of Miami is a natural focal point given the Mayor's longtime environmental advocacy and leadership," said FPL Group's Lewis Hay. "However, Energy Smart Miami represents the beginning, not the end, as it is the cornerstone of a $700 million investment in Smart Meters to every residential FPL customer in Florida."

"GE is committed to delivering energy-efficient technologies to ensure a more sustainable energy future. Energy Smart Miami will be an outstanding example of 21st century technology enabling our vision of a more diverse energy portfolio supported by a dynamic, flexible and smarter energy grid. We congratulate the mayor and citizens of Miami for committing to a cleaner, energy-efficient future. This is a great example for cities across America -- and the world," said GE's Jeff Immelt.

"An intelligent energy infrastructure can accelerate American leadership, create jobs, help increase our standard of living and drive sustainable growth," said John Chambers of Cisco. "Cisco believes that as the U.S. builds out a smart, secure energy grid for the 21st century, networking technology will serve as the platform and public-private partnerships will be key to the success. We are proud to be part of this important effort in Miami."

"Silver Spring Networks has built the leading open networking platform for the Smart Grid, and we are honored to broaden the scope of an already successful partnership with Florida Power & Light through Energy Smart Miami," said Silver Spring Networks' Scott Lang. "Through the leadership of Mayor Diaz and Mr. Hay, Energy Smart Miami will empower the people of Miami for years to come."

Energy Smart Miami is estimated to generate demand for 800 to 1,000 jobs, both directly and indirectly involved in the deployment, during the two-year implementation period. The initiative includes a wide range of technologies that improve electricity delivery and help customers better manage their electricity usage. Highlights include:

·         Smart-Grid Automation and Communications – More like the Internet than an electric network, the new Smart Grid system will connect Smart Meters, high-efficiency transformers, digitized substations, power generation and other equipment through a centralized information and control system. This will continuously monitor status, identify and automatically fix or dispatch teams to outages and provide useful information to improve reliability, efficiency and productivity from power generation through consumption.

·         Smart Meters – Through the Energy Smart Miami initiative, Smart Meters will be installed in more than 1 million homes and most businesses in Miami-Dade County. Over the next five years, FPL intends to expand the project to a total of more than 4 million homes in Florida. The cost of expanding Smart Meters outside of Miami-Dade County represents a $500 million investment in addition to the $200 million proposed in support of Energy Smart Miami. Smart Meters serve as a key interface in a system that combines a number of elements – intelligent meters, a two-way communications network using open standards, and sophisticated operating systems and databases. As a result, customers will be able to go online and monitor how much energy they have used by the month, day or hour. With this information, FPL customers will have the ability to lower their electric bills by giving them substantially more information to make decisions about their electricity consumption. Ultimately, Smart Meters and the network that connects them will provide consumers with the ability to see and manage individual devices consuming electricity in their home such as air conditioning and appliances. Smart Meters will also provide FPL with information that will help it to operate more efficiently and enhance reliability.

·         Plug-in Hybrid Electric Vehicles (PHEVs) – 300 plug-in hybrid electric vehicles will be added to the FPL fleet serving Miami-Dade County. The PHEVs will be powered through approximately 50 new charging stations. Additional PHEVs will be rolled out in trials at Miami Dade College and the City of Miami.

·      Consumer Technology Trials – Using the capabilities of installed Smart Meters, the initiative will conduct studies of additional consumer communications and empowerment systems to determine which delivers the greatest energy savings and consumer satisfaction. The initial trials in approximately 1,000 households in Miami-Dade will test several different systems, including:

The partners comprising Energy Smart Miami's expert implementation team have worked together extensively to ensure that the initiative meets President Obama's criteria as a "shovel-ready" project to qualify for matching funds from the American Recovery and Reinvestment Act of 2009, commonly known as the federal stimulus package. Contingent on receiving this federal support, Energy Smart Miami could begin later this year and be completed by the end of 2011.