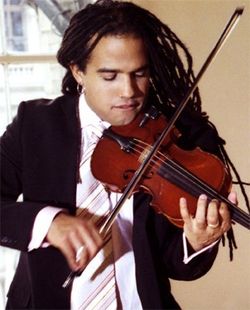 Adrienne Arsht Center for the Performing Arts of Miami-Dade County and Miami Light Project are pleased to announce the award-winning composer and recent guest performer on the Fox TV hit show "American Idol," DANIEL BERNARD ROUMAIN (DBR) WITH SPECIAL GUEST EMELINE MICHEL in concert at the John S. and James L. Knight Concert Hall on May 1 at 8:00 p.m.

Haitian-American composer and musician DANIEL BERNARD ROUMAIN (DBR) and his genre-jumping, multicultural, high-energy ensemble, DBR & THE MISSION, will present an electrifying performance described as "an evening of chamber music with the accessible feel of a rock concert" (Albany Times-Union). The group will perform from a diverse selection of DBR's most recent works including Sonata for Violin and Turntables, One Loss Plus, and Darwin's Meditation for the People of Lincoln.  The concert will also feature the queen of Haitian pop, EMELINE MICHEL, as a special guest.

Known for fusing his classical music roots with a myriad of soundscapes, DANIEL BERNARD ROUMAIN, a South Florida native, made a reputation for himself as a passionately innovative composer, performer, violinist, and band leader. His exploration of musical rhythms and classically-driven sounds is peppered by his own cultural references and vibrant musical imagination.

As a composer, his dramatic soul-inspiring pieces range from orchestral scores and energetic chamber works to rock and electronica. DBR's One Loss Plus debuted in 2007 and is a multimedia piece that showcases the violin in a rich, broad range. His eclecticism in One Loss Plus was described by The New York Times as "wide-ranging as ever." Darwin's Meditation for the People of Lincoln, the second commission to premiere at the BAM Next Wave Festival, is a musical setting of a new pocket play by Daniel Beaty exploring an imagined conversation between Darwin and Lincoln featuring the chamber orchestra SymphoNYC and internationally renowned Haitian recording artist EMELINE MICHEL. Proving that he is, as described in The New York Times, "about as omnivorous as a contemporary artist gets." DBR's accolades range from being voted "America's Assignment" on the CBS "Evening News," to receiving praise as one of the "Top 100 New Yorkers" in New York Resident, "Top 40 Under 40" business people in Crain's New York Business and one of the entertainment industry's "Top 5 Tomorrow's Newsmakers" on 1010 WINS Radio.

Special guest EMELINE MICHEL is the reigning queen of Haitian song; a captivating performer, versatile vocalist and one of the premier Haitian songwriters of her generation. She has recorded and appeared on concert stages throughout the Caribbean, Europe, North America and South America for more than 20 years. Singing in both French and Haitian Creole, her nine albums - "Douvanjou ka leve" (May the Sun Rise), "Pa gen manti nan sa" (There's No Doubt), "Rhum & Flamme" (Rum & Flame), "Tout Mon Temps" (All My Time), "The Very Best, Ban'm pase" (Let Me Pass), "Cordes et Ame" (Strings and Soul), "Rasin Kreyol" (Creole Roots), and "Reine de Cour" (Queen of Hearts) - have catapulted her into international acclaim. EMELINE MICHEL is beloved by Haitians for combining traditional rhythms with social, political and inspirational content.

Single tickets for DANIEL BERNARD ROUMAIN (DBR) WITH SPECIAL GUEST EMELINE MICHEL are on sale and range from $25 to $75. $75 VIP tickets include access to a post-show meet-the-artist reception. Tickets are available for purchase online at www.arshtcenter.org or at the Box Office at 305.949.6722. For information on group sales, please call 786.468.2326.