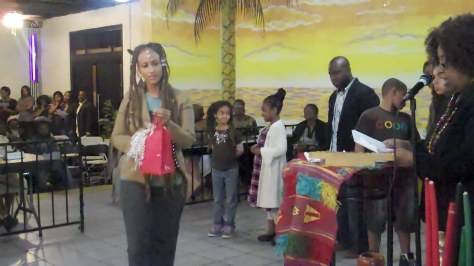 This is the 20th year the Miami-Dade Chapter has celebrated Kwanzaa with the Greater Miami community. Understanding the importance of celebrating faith, family and culture, the organization's event has grown from a celebration in a member's home to public venues with feasts of various delicacies.

One of the highlights of the evening was the $1,000 pledge to the Miami-Dade Chapter's scholarship fund by Alix Desulme, City Clerk for the City of North Miami. More than 150 people were present but a special shout out goes to Rose Reeder of RJR and Associates; Thomasina Turner-Diggs of the City of Fort Lauderdale CRA; and City of Miami District 5 Commission candidate Georges William. A special thank you to everyone who donated educational toys that will be distributed to children through the Overtown NET office.

Denise Ross-Layton, owner of Blessed Catering, has a gem of a business in the heart of Liberty City. She offers any catering, party planning and business meeting needs you desire. Check her out and practice the Kwanzaa principle Ujamaa [OO-JAH-MAH] (Cooperative Economics) by patronizing her business. Harambee'!