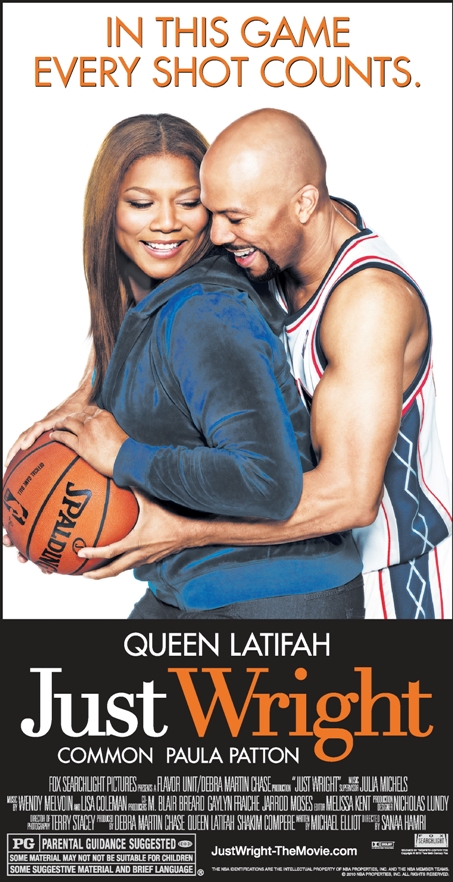 By now you’ve probably seen commercials about the soon to be released movie, "Just Wright", starring Queen Latifah, Common and Paula Patton. You can win free passes to the advanced screening of the movie in Aventura but first here’s the synopsis:

JUST WRIGHT stars Queen Latifah (BRINGING DOWN THE HOUSE) as Leslie Wright, a straight-shooting physical therapist who gets the dream job of working with NBA All-Star Scott McKnight (Common – DATE NIGHT). All is going well until Leslie finds herself falling for Scott, forcing her to choose between the gig of a lifetime and the tug-of-war inside her heart. Oblivious to her romantic overtures, McKnight is instead drawn to the affections of Leslie’s gorgeous childhood friend Morgan (Paula Patton - PRECIOUS), who has her sights set on being an NBA trophy wife. Is Leslie destined to play the role of “best friend” forever or will Scott finally see that what he always wanted is right in front of him? Set against the exciting world of championship basketball, the game of love takes on the battle of the sexes in the romantic sports comedy JUST WRIGHT, starring three of Hollywood’s most charismatic personalities as they navigate the full-court-press of love. Visit http://www.foxsearchlight.com/justwright/

Now, doesn’t that seem like a really nice movie? I’m definitely checking it out and will share my review with you later. In spite of Common and Latifah being two of my favorite rap artists, I’ll be honest in my critique. From the trailer, it’s obvious there’s on-screen chemistry between the three main stars.

Local screening,7:30 pm, Thursday, May 13, 2010, AMC Aventura 24. For your chance to receive screening passes, log on to WWW.GOFOBO.COM/RSVP and enter RSVP Code: LKYB0B32. Passes are available on a first-come-first-serve basis and do not guarantee admittance because the theater is typically overbooked. Arrive early for a better chance at seating. This film is rated PG for adult language, adult situations. Holler back and let us know what you think about the movie. In theaters Friday, May 14, 2010.