Blogging Black Miami
Miami Jackson Alumni News
Don't sleep on this! Find out plans for YOUR community! Check the website. Attend the meeting. 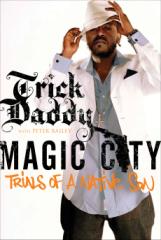 The self-proclaimed "Mayor of Miami" Trick Daddy exploded onto America's pop culture landscape as one of the pioneers of Dirty South rap. His 2001 album, Thugs Are Us, established him, as one critic wrote, "alongside Ludacris and Mystikal as one of the few nationally championed Dirty South rappers, and … catapulted him onto the playlist of every urban radio station in America, not to mention MTV." Widely credited with infusing hip hop with new life, he has been one of the most prolific southern talents since his introduction on Uncle Luke's timeless 1996 dance floor staple, "Scarred".

Born and raised in poverty as one of twenty-seven children, Maurice Young aka Trick Daddy, is considered by many as a thoughtful thug. His unsparing portrayal of life in the southern ghetto has earned him a legion of fans. Over a twelve-year career, he's released two platinum selling albums and numerous Billboard chart toppers. The recent merger of Trick's label, Dunk Ryders, with the high profile Cash Money Records, the home of Li'l Wayne and other platinum-selling stars, along with the upcoming release of the debut Dunk Ryders group album, is currently causing quite a buzz in music circles.

Magic City: Trials of a Native Son, chronicles Trick Daddy’s story against the backdrop of Miami, the Magic City. It is an extraordinary story, of a childhood marked by poverty, a crime-laden adolescence, an incarceration, a meteoric rise to fame, and a struggle with a potentially fatal medical condition. It's the story of a boy whose father was a pimp; who, left to his own devices, learned to hustle to survive and whose only role model was his brother, the drug dealer he watched plying his trade on the block. But while his story is remarkable, the most astonishing part is that he is not only still alive, but that he got out.

Magic City: Trials Of A Native Son is the story of how that potent mixture of extremes, the dazzling beauty and glittering wealth of the Magic City, and the crime, the corruption and the despair playing out in its shadows gave rise to what has now become the most dominant sound in hip hop, in the process revitalizing a stagnant art form. MAGIC CITY, told in Bailey's artful prose, is an ode to the city of Miami, a riveting tale of a paradise lost.