The Miami-Dade County Commission  recently honored Prince Emmanuel Abiodun Aderele, Luis Ezequiel Torres and Community Builders Holistic Development Corporation for facilitating a cultural collaboration at the  National Endowment for the Arts /National Council for the Traditional Arts 2010 National Honors Awards Ceremony and Concert. The collaboration included performances at the Library of Congress and the Great Hall at Strathmore.

Prince Emmanuel Abiodun Aderele is a native of Nigeria West Africa the Grandson of His Royal Highness Oba Rufus Adesokeji Aderele Osemawe of Ondoland, Tewogboye II one of the longest reigning Kings in the Yoruba Kingdom of West Africa (32 years). The Prince is the International Artist in Residence at the Osun's Village and African Caribbean Cultural Art Corridor, a project of Community Builders Holistic Development Corporation, whose mission is to establish International Artist/Community Exchange Programs that facilitate International Trade and Global Understanding and reinforce the significance of Ancient Traditional art and culture.

The initiative focuses on the preservation of the traditional cultural heritage of South Florida's African and Caribbean Diaspora communities. It will ultimately drive tourism, trade and commerce while providing pathways to develop communities economically

2010 National Council of Traditional Arts Folk Heritage honoree Ezequiel Torres, a master of the making and playing of the Afro-Cuban Bata drums used for the Orisha (the traditional religion of the Yoruba people of West Africa), found it befitting to showcase the talents of Prince Emmanuel Abiodun Aderele from Nigeria's Yoruba Kingdom, a carrier of the intangible living cultural heritage of his Yoruba ancestors.

Torres and Prince Aderele's recent collaboration during the 2010 NEA Heritage Fellows Concert at Strathmore, demonstrated the cultural bridge that preserved the sacred music, song and dance of the Yoruba Orisha. Despite the travesty of the transatlantic slave trade, the customs and Yoruba Orisha traditions traveled from Africa and have been preserved throughout the Diaspora.

Think of two African brothers, separated from birth because of slavery -- one raised in Africa, one raised in Cuba, and then reunited. These individuals honor their ANCESTORS by proving that despite slavery, and attempts at cultural ethnic cleansing, they will continue to honor their heritage and their cultural spiritual traditions. 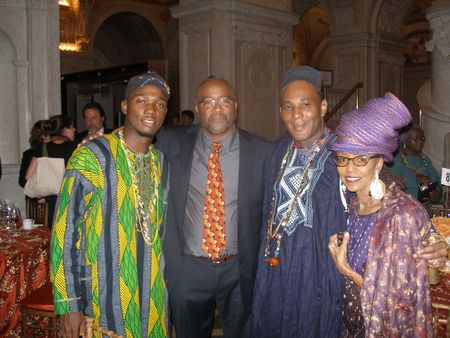 It is great to see Africa Motherland connects with her children in the Diaspora. Kudos to Chief Styles for his great work in choreographing the linkage. Dr. Adewale Alonge, Executive Director, ADPED inc. (Africa-Diaspora Partnership for Empowerment & Development.