Speak On It: A Call for Social Action (Part 1 in a series) 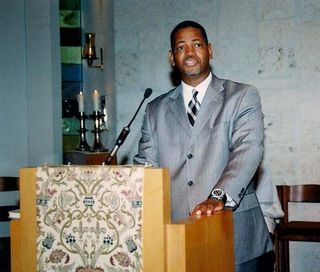 Keynote address delivered at the Church of the Incarnation in Miami, FL on the occasion of the observation of Social Justice Sunday, November 14 2010.

It is indeed a pleasure to once again to be in your presence. As some of you may recall, during my Congressional run I visited with you and introduced myself as a Candidate for the United States House of Representatives for District 17.  Well, as you know, that race is over now and I did not win but I am happy to report I am still standing.  My feelings were a little hurt but I’m ok.  For those of you that voted for me, I thank you for your support. For those that didn’t, I simply say…God Bless you too.

In preparing to come before you today, I was advised this is Social Justice Sunday and  my speech should center on social issues, and although I set my compass towards discussing social issues, I found it more advantageous to discuss “social action,” which I think will bridge the divide. In doing so, I pondered over my Congressional run from start to finish and thought it not robbery to enlighten you as to why I did what I did. So here we go…

Although I am a democrat, I changed party affiliation to that of a non-party affiliation, referred to as an independent, when it was time to qualify.  In the beginning, there were 13 of us vying for the Congressional seat.  At that time, I was not satisfied with either political party, Democrat or Republican.

I am not one of those voters that vote party line simply for the sake of the party. Reverend Al Sharpton once said that we (referring to African Americans) are about the party that is about us.

When you take a good look at the political structure today, it is easy to see that African Americans are still neglected by both parties. We still face the same issues no matter which party is in power.  Be mindful that Congressional District 17 has always been run by the Democratic Party, starting with William Lehman, then Carrie Meek and then Kendrick Meek.

What was important to me at the time was to get the message out that we are not a monolithic people and our votes cannot be taken for granted simply because of our party affiliation.

Although I filed as an Independent, my qualifications were not limited to party affiliation but to the position as that of a law maker for all people of District 17. Over 16,000 voters agreed with me and voted for me. Not enough to win the race but enough to make my voice heard.

Case in point, during the last campaign, Alex Sink, who ran for Governor, failed to attend the NAACP forum for the candidates after agreeing to attend.  As a result, Bishop Victory Curry ridiculed her over the airways on his radio station advising her that she cannot take the Black vote for granted. They later made up and he gave her his support once again. When she attended the NAACP banquet last month, of which I am a Silver Life member, Congressman Alcee Hastings, the keynote speaker reminded her yet again the Black vote cannot be taken for granted and simply because she was a democrat she could not assume that she would get the Black vote. She eventually lost her race for Governor. How the lack of the Black vote played into her losing the race has yet to be determined.

While I did not win my race either, I walked away with a wealth of experience as to the political process, knowledge as to the membership of the “who’s who” of Miami and with great hope for the future of this district. I had the opportunity to meet people I’ve never met before.  I heard about problems I did not know existed before, but more importantly, I experienced first-hand what Martin Luther King, Jr., wrote about in his book “Why We Can’t Wait.”

In Chapter 8 of his book, Dr. King stated that “Negroes have traditionally positioned themselves too far from the inner arena of political decision. Few other minority groups have maintained a political aloofness and a non-partisan posture as rigidly and as long as Negroes. The Germans, Irish, Italians, and Jews, after a period of acclimatization, moved inside political formations and exercised influence. Negroes, partly by choice but substantially by exclusion, operated outside of the political structures, functioning instead essentially as a pressure group with limited effect. That was exemplified in the past election, when one out of ten black residents in District 17 voted and only 48% of the registered voters in Miami-Dade County voted as a whole.

Dr. King stated “The Negroes’ real problem has been  they seldom had adequate choices. Political life, as a rule, did not attract the best elements of the Negro community, and White candidates who represented their views were few and far between. However, in avoiding the trap of domination by unworthy leaders, Negroes fell into the bog of political inactivity. They avoided victimization by any political group by withholding a significant commitment to any organization or individual. That concept has been termed “Social action” or in that case “Social inaction.” (Part 2 of 4 continues tomorrow...)