Sneakers on a powerline and other neighborhood concerns 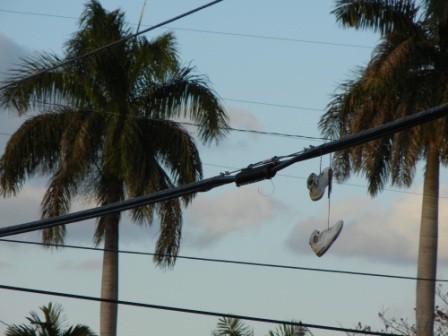 I bought a new camera. It’s a Nikon S8100 and I got it from Target on sale. As soon as the battery charged, I took it outside to take a few shots of the neighborhood. It has a really great zoom for a compact camera and I tried it out on a few shots. Among the shots I took was a picture out a pair of sneakers someone had thrown over a power line. No big deal I thought; just some kid’s prank. Then my niece told that meant drugs are being sold nearby. Say what?

I didn’t believe her so you know I do what most folks do nowadays; I googled the subject. Anyhoo, lo and behold, the sneakers on the power line could have a number of different meanings: marking gang territory; drugs sold in neighborhood; the death of someone; someone’s moving; school’s out for the summer or just a prank. I mean, really, who knew? Regardless the reason; they need to come down.

Then I took a good look around the neighborhood, more specifically, my street, and reflected on how it has changed and in many ways not for the better. There’s an open area across the street from my home that many people think is a park. It was once a very idyllic area even with a portion of it once being nicknamed “Hobo Land.” Now people walk or drive pass not knowing its history.

Fast forward a little more than forty years, post Hurricane Andrew, post flooding about ten years ago and several conflicts with the last owner of the property and we have a greenspace that is sometimes used by neighbors but for the most part is a nice quiet place. Folks that moved in the area in the last twenty years have absolutely no idea how some of us have fought to keep the neighborhood from being overrun with poorly built and industrial-designed low income houses and apartment buildings. That was my first lesson on the politics in awarding and using community development dollars but that’s another story for another time.

Unbeknownst to the neighbors, a plan was approved a few years ago to allow construction of a small apartment building behind a church that’s no longer used. That calls for a portion of 12th avenue to be extended, perhaps to 95th street. Needless to say, we are not happy and it is in violation of a previously agreed to covenant. There are already too may people living in the area as it is. Too many large apartment buildings and an old trailer park are a recipe for too much traffic and an increase in crime.

For whatever reason, there have been recent incidents of vehicles being abandoned or torched on our street and folks think nothing of littering the area with trash after they have eaten or done God knows what in their cars in the wee hours of the morning. It’s time for that to come to an end or at least be deal with swiftly by enforcement officials.

And another thing for some reason, there are drivers who seem to have no regard of this being a residential area. They zoom up and down the street as if it was the Indianapolis Speedway. Hopefully the traffic calming plans will be implemented soon or does a child have to get hit by a car and die before any action is taken to resolve the matter? 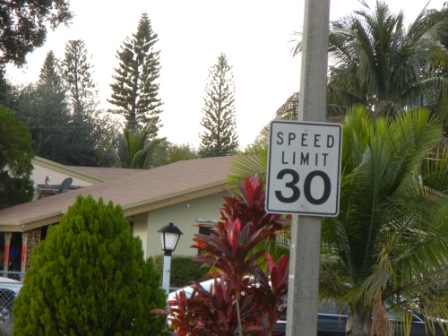