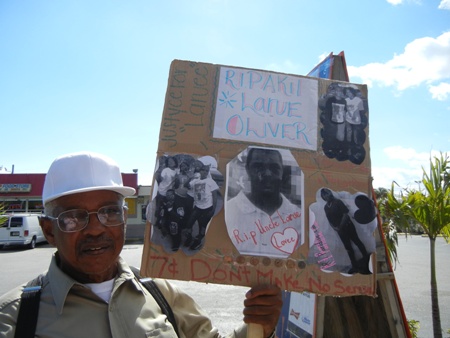 Mr. Willie Moseley fights for justice for his grandson, Akil Larue Oliver, who was beaten death.

“There comes a time when people get tired of being plunged into the abyss of exploitation and nagging injustice.”  ~Martin Luther King, Jr., Stride Toward Freedom: The Montgomery Story, 1958

After attending the Martin Luther King Parade in West Perrine on Saturday, January 15, 2011, I found myself at the site of the protest of the murder of Akil Larue Oliver. This was not a planned stop but one of those moments where I was not in control but was being led to do God’s will. Anyway, before I lose some of you on a spiritual tip, let me just say that it was encouraging to see this small but dedicated group of people continue this boycott in seeking justice for Akil Larue Oliver and economic justice for the people who have patronized the Quick Shop convenience store in Perrine.

It’s 2011 and I keep feeling as though there is a need to fight for basic rights just as my parents did in the 1960’s. There are many issues that need to be addressed surrounding this store, the activities that allegedly have taken place in the store and the brutal beating death of Akil Larue Oliver.

We will continue to ask questions about this situation and interview those involved in the protest and resolution of this situation. We’ll talk about respect, disrespect and self-respect. Nothing happens to one person that doesn’t impact someone else.

On this day that we celebrate the birth of the Rev. Dr. Martin Luther King, Jr., let’s think on this:

“If you will protest courageously, and yet with dignity and Christian love, when the history books are written in future generations, the historians will have to pause and say, "There lived a great people - a black people - who injected new meaning and dignity into the veins of civilization."  This is our challenge and our overwhelming responsibility.”  ~Martin Luther King, Jr., address to Holt Street Baptist Church, 5 December 1955