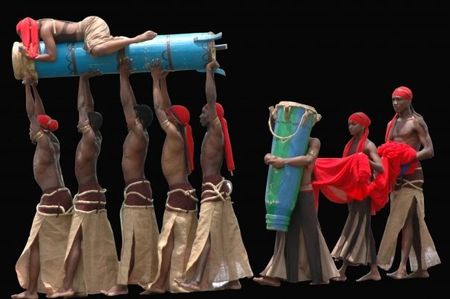 MIAMI, FL  – Now celebrating its Fifth Anniversary Season, the Adrienne Arsht Center for the Performing Arts of Miami-Dade County has convened a wide range of community leaders in support of Ayikodans, one of Haiti’s most prominent artistic exports. Ayikodans will burst onto the South Florida dance scene with two fundraising performances at the Adrienne Arsht Center on Saturday and Sunday, May 21 and 22, 2011. The company will exhilarate audiences with a provocative and riveting program, and will give the community a taste of what is to come next spring, when it debuts its Adrienne Arsht Center-commissioned performance.

The magnitude 7.0 earthquake that struck Haiti on January 2010 was a devastating setback for Ayikodans. The company suffered severe damage to its rehearsal studio and performance space. Some of the dancers were injured and others lost family members and friends. However, for all, the will to dance still persists.

“We are very grateful that South Florida’s top influencers and community leaders have convened and joined efforts to help us bring this world-class dance company to Miami,” said M. John Richard, president and CEO of the Adrienne Arsht Center. “We are confident that with the support of our community, Ayikodans will be propelled to the next level of sustainability and global recognition and come to represent the next chapter of Haiti.”

The May 21 performance, which is sold out, is a by-invitation-only fundraiser that includes a private ‘Meet the Company’ VIP reception. Due to the overwhelming response, a second show has been added to make the performance accessible to the general public.

The second performance, open to the public, will take place on Sunday, May 22 at the Carnival Studio Theater. All seats are $35.  Tickets go on sale to members on Wednesday, April 13 and to the general public on Friday, April 15 and will be available through the Adrienne Arsht Center box office by calling (305) 949-6722, or online at www.arshtcenter.org

Founded in 1987 in Port-au-Prince by choreographer and dancer Jeanguy Saintus, Ayikodans blends influences from folk dance, free improvisation and varied African and indigenous Indian dance forms as well as French traditions and voodoo religious culture. The company is synonymous with a contemporary Haitian aesthetic that while rooted in tradition, reflects a modern Caribbean culture. The word Ayikodans is derived from Ayiti, the Haitian Creole word for Haiti and Kontredanse, a form of traditional dance inherited from Haiti’s colonial past.

Recipient of the 2008 Prince Claus Award, an annual recognition from the Dutch Ministry of Foreign Affairs for individuals who show a progressive approach to culture, Saintus  has developed through Ayikodans a powerful, contemporary dance style and a rejuvenation of Haiti's dance tradition.

The Ayikodans program for May 21 and 22 includes some of the company’s most beloved repertory pieces. Featuring two original works, Zantray and Eritaj, the performance will incorporate dance, live drumming and elements of traditional Haitian religious ritual.

“There are so many things to be done in Haiti, a nation where many are fighting to rebuild their lives,” said Saintus. “For Ayikodans, dance is not mere survival, it is strength and hope. Dance transcends devastation and hardship; it speaks to the enduring power of the human spirit.”

Ayikodans company members have danced on stages in Latin America, Europe, the United States and Asia, performing at such venues such as Palacio de Bellas Artes in the Dominican Republic, Tropentheater in The Netherlands and Teatro Anayansi in Panama. Ayikodans appeared with the National Dance Theater Company of Jamaica at the Gusman Center for the Performing Arts in Miami in 2000 and performed at the African-America Cultural Center in Fort Lauderdale in 2003.