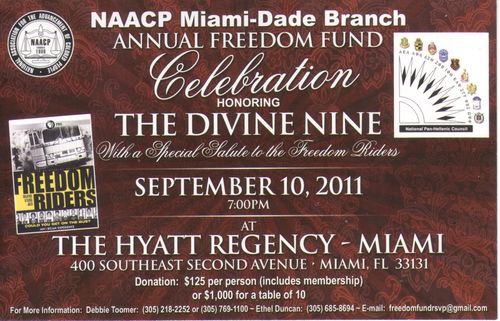 The upcoming Annual Freedom Fund Celebration of the Miami-Dade Branch of the NAACP will honor the Divine Nine Pan-Hellenic organizations with a special tribute to the Freedom Riders. The Divine Nine are the Greek-letter organizations that are members of the National Pan-Hellenic Council: Alpha Kappa Alpha Sorority; Alpha Phi Alpha Fraternity; Delta Sigma Theta Sorority; Zeta Phi Beta Sorority; Iota Phi Theta Fraternity; Kappa Alpha Psi Fraternity; Sigma Gamma Rho Sorority; Phi Beta Sigma Fraternity and Omega Psi Phi Fraternity. The Freedom Riders are legends in civil rights. A multi-racial group of people, the Freedom Riders courageously broke down segregation barriers in the United States in the 1961. They were recently featured on PBS and The Oprah Winfrey Show on the occasion of the 50th anniversary of their historic bus rides. All of the groups to be honored have played a significant role in the fight for civil rights in this country, don't miss this momentous celebration.