The Return of Michelle Spence-Jones...Again 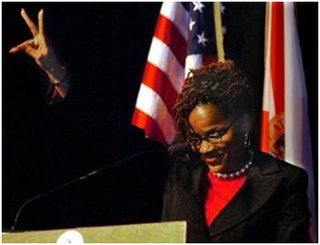 In what clearly was a surprise to no one that follows Miami politics, suspended, embattled and disgraced former City of Miami Commissioner Michelle Spence-Jones no longer fits any of those descriptions as all of the remaining charges against her by the State have been dropped.

Michelle Spence-Jones will reclaim her commission seat and back pay to which she is entitled. Like it or not, that "nappy-headed child of God" as she has previously referred to herself, has won once again and State Attorney Katherine Fernandez-Rundle and her minions again look like incompetents. No matter how one spins the latest case, or one's opinion of any of the parties involved, it is what it is and the legal system has run it's course. It's time to move on.

When Michelle Spence-Jones's mentor, former County Commission Chair Barbara Carey-Shuler, recanted crucial testimony given to the State and the State did not seek legal recourse against her, the handwriting was on the wall. Assistant State Attorney Richard Scruggs's close-out memo is an interesting read as it leaves several questions unanswered regarding forged documents and accuses Spence-Jones and her attorney of planting false evidence.

For now, Michelle Spence-Jones is, without a doubt, the queen of black Miami politics. Commissioner Richard Dunn, must vacate the District 5 seat again. Unbelievably, the soon-to-be-former District 5 commissioner expects to receive over $200,000 for the three remaining years of the term that he started. He believes he is entitled to it. Don't forget that Spence-Jones is entitled to $100,000 for the almost two years she was out of office. Such is Miami politics.

Well, folks, Miami politics just got more interesting with the return of Michelle Spence-Jones. Let's see what happens with her basically joining a new City Commission. She will be up for re-election in 2013; she will win overwhelmingly --- again.

And the black community continues their tradition of letting leaders fleece it.

The signs by Spence-Jones celebrating her 'acquittal' posted all over NE Miami are ridiculous. It's not about hyping yourself Michelle, it's about serving the people.

VIVA MICHELLE SPENCE-JONES!
CONGRATUTIONS....YOU TRULY HAVE BEEN
BLESSED AND PROTECTED BY GOD ALMIGHTY
AGAINST THE INJUSTICE PERPETRATED BY
THE POWERFUL AND CORRUPT STATE ATTORNEY
OFFICE.
MAY GOD CONTINUE TO BLESS AND PROTECT
YOU AND GUIDE YOU FOR THE GOOD OF THE
PEOPLE YOU REPRESENT.