The Miami-Dade Chapter of the Florida A&M University National Alumni Association is spearheading a national day of prayer on Saturday, January 28, 2012 from the Betty Ferguson Center in Miami Gardens. This is a community event but all FAMU alumni and supporters are asked to gather at 2 p.m. to reflect, remember, reunite and commit to assure the continuance of the legacy of excellence of the University.

The black community and the higher education community have been aware of Florida A&M University and its history of accomplishments through the years. It seems the hazing death of Robert Champion made FAMU a household word, and not in a good way, across all demographic groups in all communities throughout the United States.

After the Champion death, other FAMU hazing incidents and the FAMU administration’s actions taken regarding hazing captured national news attention for several weeks. Local FAMU alumni decided to host a call for prayer for their alma mater. This activity is designed to unite FAMU alums, to re-focus on the University’s rich history, and as a call to action for alumni to commit to assure the University maintains its autonomy.

Hopefully this activity does not become an opportunity to attempt to defend the indefensible. While it is disingenuous to frame hazing as a problem unique to HBCUs, this spotlight, as negative as it is, is an opportunity for an honest conversation and development of corrective action regarding the dangerous activities our college and high school students are involved in.

Special guest is Desmond Meade, President of the Florida Rights Restoration Coalition. He will speak on the new voting laws relative to ex-felons and efforts to restore their voting rights.

Please share this meeting notice with someone who can benefit from this information.

The nationally accredited Exploration Station is one of the only science, technology, engineering, and mathematics focused institutions of its kind in Miami-Dade County

“The name was chosen based on one of the principles of pre-school education, which is teaching children to explore the world around them,” said Dr. Susan Neimand, MDC’s director of the School of Education. “We wanted the name to reflect our commitment to a child-centered environment where children learn based on their interests, and in a safe and nurturing environment that encourages this type of learning.” 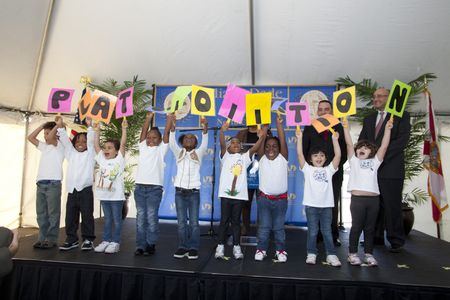 Students from the pre-school flash letters to spell out the school’s new name. 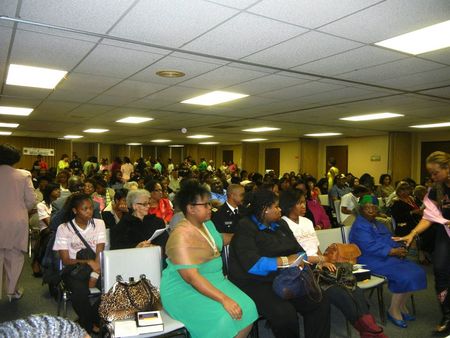 On Sunday, January 15, 2012 the local graduate chapters of Alpha Kappa Alpha Sorority - Gamma Zeta Omega and Pi Delta Omega hosted America’s Sunday Supper Youth symposium at New Way Fellowship Praise and Worship Center in Miami Gardens. The event was an opportunity for a multi-generational conversation on civil rights achievements and expectations for the future, there was also a salute to the nation’s military.

It was a wonderful experience to have Tuskegee Airman Eldridge Williams present as a real-life hero of that group of men to be documented again in the upcoming film, “Red Tails”. There were also U.S. service members present from the United States Southern Command. 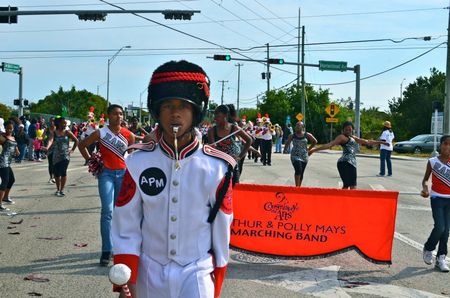 It was a beautiful day for the Dr. Martin Luther King Parade in West Perrine on the morning of Saturday, January 14, 2012 in West Perrine. I always love that parade because it’s organized, spacious and the spectators are polite. There were rumors that the Parade had been cancelled this year so I was extra curious as to how it would turn out.

Mr. Ed Hanna and the parade organizers should be proud. There were not as many spectators as usual but it was a nice, ethnically diverse crowd, representative of Dr. King’s fight for the civil rights of mankind. I’m always curious if the folks who attend or participate in the  parade really understand why we celebrate with a national holiday.

Anyway, the parents and other family members enjoy watching their children in the parade. The marching bands and auxiliary units looked exceptionally nice. Since my Dad was raised in the Perrine area, he gets a kick out of talking to childhood friends and neighbors.

The King events also included a breakfast and a Battle of the Bands. My schedule didn’t allow me to attend this year but they are usually great events. It’s amazing how theses events are pulled off each year. It takes dedicated, committed people to make these events happen. I appreciate each and every person who played a part because the community needs events like these. On Friday, January 13, 2012, the King of Clubs of Greater Miami held their annual Black Tie Affair at the Doubletree Hotel off Biscayne Bay near downtown Miami. The event is the highlight of the organization’s Winter activities and a precursor to their scholarship luncheon held in the Spring.

Since my Dad, Dr. Art Woodard, has been a member of the organization for many years, I’ve attended several of these events over the years. This year’s event was particularly lively. Dad’s table guests this year were: Mr. & Mrs. W.B. Koon; Dr. Carrie Keys; Romania Wilson; Naha Nixon; Dorothy McCormick; Ronnie Wilson; Mr. and Mrs. James Farrington and moi.

The event was chaired by James and Marge Fayson. Dr. Richard Strachan is the president of the organization. A good time was had by all. Kudos to the King of Clubs.

Here is the Official Sample Ballot for the upcoming election. By the time Florida voters cast ballots, the Republican presidential candidate field may be narrowed down to two or three. As of this post, five candidate remain: Newt Gingrinch; Ron Paul; Rick Perry; Mitt Romney and Rick Santorum.

The first charter amendment question makes it easier for citizens to mount a petition drive and have the question placed on the ballot on the next scheduled General election rather than require costly Special elections.

The second ballot question, which really should have been two separate questions, center on County Commissioners. Basically, it raises the commissioners salary from $6,000 to approximately $92,097 and imposes limits of two consecutive four-year terms. Unless someone influential like Norman Braman says different, most voters will likely vote NO because of the salary increase; those voters who want a change in the composition of the Board will vote YES. Don't let someone else decide for you, get out and vote. 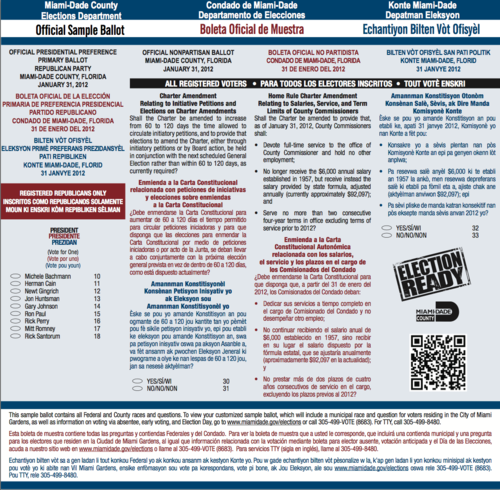 There was standing room only during the performances in the Theater and the feast in the Music Hall. Guests were treated to a percussion performance by Prince Emmanuel Aderele, Artist-in-Residence, Osun’s Village; Ronnie Wilson and child prodigy, Miguel Russell.

Karen Tynes of the Miami Herald, made the official announcement that Mrs. Mary Williams Woodard will be honored as one of individuals featured on the upcoming AT&T Black History calendar.

The standing room only crowd at the event dictates a larger venue be secured for the next event. Let's remember to practice the principles of Kwanzaa all year long to make our community a better place for future generations. Harambee!

Remember that registered Republican voters will vote on a presidential candidate and ALL registered voters can vote on the two charter amendment ballot questions. Please spread the word to your family and friends and get out and vote.

There has been much discussion about the academic success and challenges of local public schools. Come out and learn how to successfully navigate the Common Core Standards; the current testing models and assessments students are subjected to; how to get assistance with social, medical and legal issues; how schools should use their Title I budget; the structure of the school District and parents’ rights and responsibilities.

If you are a parent or concerned about public education, you should attend these sessions so you can effectively advocate for the delivery of a quality to our students.

Participants will receive free UFEI Bucks to redeem for school supplies. You must attend workshops and present your child’s report card. Materials and refreshments will be provided if you RSVP before January 20, 2012.