Blogging Black Miami
Confirmation, Motivation and Moving Forward or Your Hate Doesn't Break Me, It Motivates Me
Career Opportunities

Altidor’s most recent achievements include: 1st place in the Oral Interpretation category at the SFCFL Qualifying Tournament last November; 2nd place in two rounds and 4th overall at the “Flying L” Invitational; and, in her junior year, 1st place in all four rounds to sweep the Oral and Interpretation division qualifying her for States.

Altidor’s achievements throughout her school tenure have been exceptional.  She is a member of the varsity basketball team, a cheerleader, and actively helps out with the school’s “Support the Troops” campaign, food drives, and other community service projects.

Altidor’s Speech and Debate experience was put to practical use when, last year, she researched, interviewed school alumni, and facilitated the commemoration of the 50th anniversary of the racial integration of Archbishop Curley High School and Notre Dame Academy – an event that has been documented and accepted into the archives of several of the nation’s leading historical centers.

Altidor has been accepted into the Pre-Pharmacy program at Florida Agricultural and Mechanical University (FAMU) where she will attend this Fall.  She hopes to find sponsors who can help underwrite the trip’s cost of $2,500.00.  Contributions or inquiries can be sent to David Monaco at dmonaco@acnd.net. 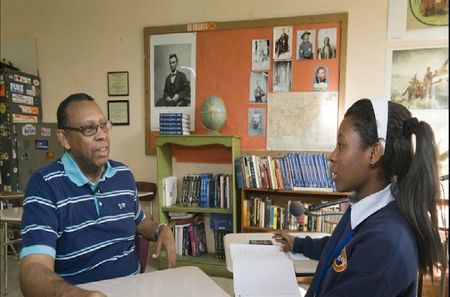 Taylor Altidor's role as captain of the Speech and Debate Team provides "real life" skills. In this photo, the ACND Prep senior interviews alumnus Albert Doyle ’64 in preparation of a 2011 school event that commemorated the school's 50th anniversary as the first high school in Florida to integrate - 10 years before public schools complied by federal court order. Altidor will compete at the National Catholic Forensic League's Grand National Tournament in May, 2012 Photo Credit: Tom Salyer Photography