The 6’5” student from North Miami Beach, played 4 years of basketball at ACND.  Prior to ACND, he attended St. Mary’s Catholic School.  This past season, Alcegaire was instrumental in leading the Knights to a 27-3 record and a regional finals appearance. He averaged 28.1 points, 11 rebounds and 5.8 assists per game during his senior year. Alcegaire's on-court performance did not go unnoticed, as he was named to the 2011-12 Florida Association of Basketball Coaches 3A All-State team and earned first team All-Dade County honors.

"Wes has really developed under the leadership of legendary Florida coach Charlie Funk,” Head Liberty Men's Basketball Coach Dale Layer stated in a press release. "He is a versatile, athletic player who can play three and possibly four different positions.  "His length, defensive ability and well-rounded game complement nicely with our team for next year.  Wes can score it, rebound it and pass it, and has a very high potential to develop here at Liberty. We are glad he is a Flame!"

A dual-sport athlete, Alcegaire was also a letterwinner in track & field, capturing the district high jump title in the 2012 Florida High School Athletic Association District 16 Championships this past April.

“Speaking on behalf of the ACND coaches, staff and community, we are extremely proud of Wesley Alcegaire,“ remarked ACND’s Athletic Director, Greg Magner. ”He developed through our Basketball program the last four years from JV to Varsity, to 1st All County and All State performer. Wes is an example of an adolescent that has not fallen into the web of entitlement. He has displayed loyalty and work ethic that is missing in today’s youth.” 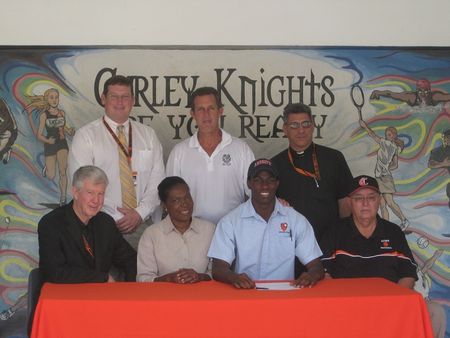