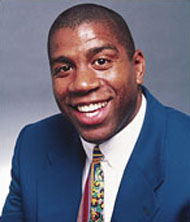 MIAMI--Ushering in a new, comprehensive approach to treating underserved South Florida patients living with HIV/AIDS, the University of Miami Miller School of Medicine has announced a partnership with Magic Johnson Enterprises and Clear Health Alliance, a Medicaid specialty plan offered by Simply Healthcare Plans, a minority owned and operated managed care plan. Clear Health Alliance (CHA) was created to provide high quality medical services to the growing HIV/AIDS population in South Florida, many of whom do not have access to care.

Earvin “Magic” Johnson and Magic Johnson Enterprises are collaborating with the University of Miami and Clear Health Alliance to ensure that these medical services reach ethnically diverse urban communities in Miami-Dade County, which ranks first in the nation for new AIDS cases per capita. Neighboring Broward County ranks second.

Physicians with the Miller School of Medicine have created a team to provide managed care that will focus on offering quality service, reducing transmission rates and maintaining the health of Medicaid patients living with HIV/AIDS.

Pascal J. Goldschmidt, M.D., Senior Vice President for Medical Affairs and Dean of the Miller School and CEO of the University of Miami Health System, says this alliance is a new model involving academia, managed care and corporations that work in partnerships. “The extraordinary advocacy and support of Magic Johnson to outstanding care for patients with HIV/AIDS will be invaluable to the ability of Clear Health and UM to serve patients afflicted with HIV/AIDS with increased efficiency,” Dean Goldschmidt said. “We are looking forward to continuing our leading academic role against HIV.”

“This alliance with the University of Miami is the next step in CHA’s efforts to expand access to critically important medical and support services for individuals living with HIV and AIDS,” said Miguel “Mike” B. Fernandez, Chairman of the Board of Simply Healthcare Plans. “CHA’s expertise and knowledge of Medicaid and Medicare, and ability to coordinate the social, healthcare and behavioral healthcare needs of HIV and AIDS patients by one entity is critical. This coordination combined with Earvin ‘Magic’ Johnson’s insight of urban communities and his advocacy for Hispanics and African Americans will help meet an increasing need for healthcare services in Florida.”

As a comprehensive Medicaid specialty plan, Clear Health will work with multiple community partners and health care providers offering medical care to patients living with HIV/AIDS and eventually expand to other cities in Florida and the nation.

“The goal of our enterprise is to deliver a variety of services to ethnically diverse communities,” Johnson said. “Aligning with Clear Health Alliance and doctors with the University of Miami will bring a comprehensive approach to caring for many Hispanics and African-Americans affected by HIV/AIDS who, up until now, may have not had access to adequate care. We understand these needs and know that this partnership will bring real solutions to the challenges facing these patients.”

There is no better place to initiate such a groundbreaking approach to providing services to HIV/AIDS patients. Besides Miami-Dade’s number one ranking in new AIDS cases, Florida ranks third in the nation in the number of people living with HIV/AIDS. About $29 billion is spent annually in the U.S. on HIV/AIDS, with half of all treatments funded by federal and state governments through Medicaid and Medicare. This new alliance will enable CHA to gather a sizable portion of Florida’s patients with HIV/AIDS within one managed care company with the support of an academic medical center.

The Miller School of Medicine has played a pivotal role in HIV/AIDS treatments, research and prevention. Researchers investigated and pioneered the use of AZT (azidothymidine) for treatment, led studies that showed a combination of antiretroviral drugs improved health and survival, and discovered how to prevent the transmission of HIV from pregnant mothers to their babies. The Miller School also has the only evidence-based prevention program for Hispanics in the nation.

National recognition of the Miller School’s expertise in the field came with the University of Miami’s recent designation as a Center for AIDS Research (CFAR) by the National Institutes of Health, one of only 21 in the nation. The award brings nearly $7 million over five years to enhance and nurture research in HIV/AIDS.

“It is critical to move the needle in the AIDS epidemic,” said Dean Goldschmidt. “With therapies and prevention programs we continue to develop, and the support of organizations such as Clear Health and Magic Johnson Enterprises, we can foresee a time when we will stop the AIDS virus in its tracks.”