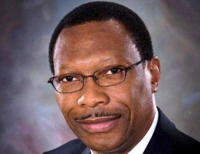 Dr. James Ammons
Yesterday was emotional for those of us who love Florida A&M University. It came as no surprise that FAMU Marching 100 drum major Robert Champion’s parents filed a lawsuit against the University for their son’s death because of a hazing ritual last November after the Florida Classic football game against Bethune-Cookman in Orlando. The Champions have been vigilant about ending hazing at FAMU and “cleaning house” at the University from top to bottom. Former Marching 100 band director Dr. Julian White retired two months ago and now Dr. Ammons stepped down, perhaps that will provide some level of satisfaction to the Champions and allow FAMU to move forward.

Recent repeated media publication of recommendations for suspension of the Marching 100 from performing in last year’s Florida Classic that were ignored was very damaging to Dr. Ammons and FAMU. Add to that, news about the low graduation rate at the University, controversy about financial problems while Ammons headed North Carolina Central University and threats of investigation by a legislative panel are just some of the challenges Ammons was faced with. It’s also important to keep in mind that the report on the FDLE investigation of University finances and band operations has yet to be made public.

It goes without saying that FAMU’s challenges will not end because of the resignation of Dr. Ammons. The FAMU Board of Trustees will meet next Monday, July 16, 2012 at 9 a.m. to address next steps as the University moves forward with finding Dr. Ammons’ successor. The call-in number is 1-800-309-9169 and the conference ID number is 10542700.

Dr. Ammons will remain on staff as a tenured professor; his resignation is effective October 11. Stay tuned.

Thanks for the information!!! really the case of the ritual that was horrible....