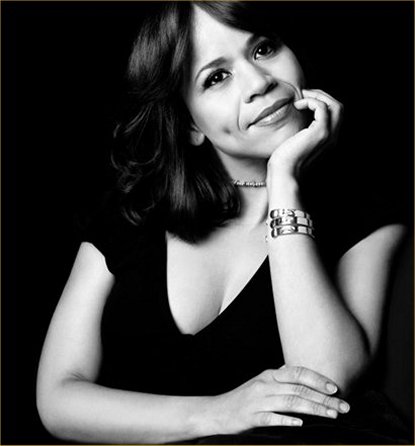 Rosa Maria “Rosie” Pérez was born in the Brooklyn, New York, neighborhood of Bushwick to Afro-Puerto Rican parents. Her mother, Lydia Fontañez Pérez, a singer, was married to Ventura Pérez at the time of Rosie's birth. However, Rosie's biological father is Ismael Serrano, a merchant seaman with whom her mother had an affair. Much of her young life was spent in foster care. She attended Grover Cleveland High School, which is located in Ridgewood, in the New York City borough of Queens, and Los Angeles City College in Los Angeles, California.

Pérez was first noticed in a dance club by Spike Lee in 1988, who hired her for her first major acting role in Do the Right Thing. Pérez started her career in the late 1980s as a dancer on Soul Train and later choreographed music videos by Janet Jackson, Bobby Brown, Diana Ross an, LL Cool J. She was the choreographer for the dancing group the Fly Girls who were featured on the Fox television comedy program In Living Color.

She made her Broadway debut in Terrence McNally's Frankie and Johnny. Pérez had a major role in the hit comedy White Men Can't Jump co-starring Wesley Snipes and Woody Harrelson.

Pérez was nominated for the Oscar for Best Supporting Actress for her role in Peter Weir's 1993 film Fearless. In 1997, she starred in Perdita Durango, a controversial film in which many scenes were edited out of the version released in the United States but remained intact in the version released throughout Latin America.

Rosie Pérez was injured in 2009 while filming an episode of Law & Order SVU. Her neck was injured when she was forcibly shaken as part of a scene. She had a slipped disc and a bulging disc in her neck and underwent surgery for the condition. A year after the accident, she appeared at the White House in a wheelchair and wearing a neck brace for a meeting with President Obama. In May 2011, Pérez filed a lawsuit against the producers of the show, claiming that the injury she incurred was the result of being "recklessly pulled, grabbed, yanked, wrenched and manhandled" during filming. Her career continues with roles in moves, television and on Broadway.