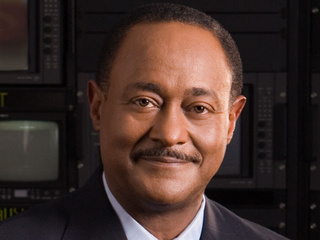 If you were in South Florida during the 1980’s you remember the dapper WCKT (now WSVN) news anchor, José Griñan. A well-respected journalist, the Tampa native was a calming and informative voice during the McDuffie riots. He is apparently still delivering the news elsewhere without the drama we’ve come to expect from current news anchors.

Now with FOX News in Houston, TX, Griñan's interest in broadcasting came while filming and helping to produce documentaries for the U.S. Army. Since being discharged from the Army, his career has taken him to several major cities throughout U.S.  Before joining the Fox 26 News department in 1993, Griñan worked in New York, Tampa, Miami, Los Angeles and Dallas.

His career choice has allowed him to be an eyewitness to both triumph and tragedy. He covered the massacre at a Luby's cafeteria in Killeen, TX. He saw civil disturbances firsthand in Miami, Los Angeles, and New York, as well as the tragic sewer explosion in Guadalajara, Mexico. Griñan has chased hurricanes in the Caribbean and on the US mainland, and was one of the first reporters on the scene of the Branch Davidian siege in Waco, TX. As many of these real-life dramas unfolded he was bringing live reports to his television viewers.

Griñan’s father was a native Cuban, his mother, a first generation Cuban-American. He speaks Spanish fluently and takes a great deal of pride in his dual heritage. Griñan has been a member of the National Association of Black Journalists since 1978. He also maintains membership in the National Association of Hispanic Journalists, and the Southwest Alternate Media Project.