Blogging Black Miami
The Re-Elect President Barack Obama Campaign Wants You!
'Souls to the Polls' is on and popping!

SORORITY MEMBERS STAGE SILENT ‘NO VOTE, NO VOICE’ DEMONSTRATION  AT SITE OF ‘SOULS TO THE POLLS’ EARLY VOTING IN MIAMI-DADE 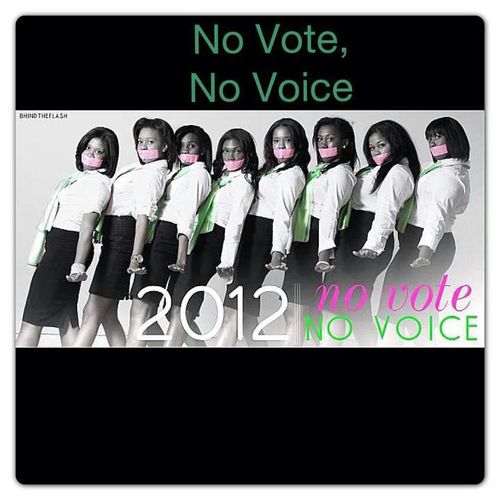 MIAMI – (October 24, 2012) – Members of Gamma Zeta Omega Chapter of Alpha Kappa Alpha Sorority, Incorporated will stage a silent demonstration at a ‘Souls to the Polls’ voting site as early voting begins across Florida.

The ‘No Vote, No Voice’ demonstration takes place 1:30 p.m. - 2:00 p.m. Sunday, Oct. 28, 2012 on Northwest 54th Street and 22nd Avenue in Miami in support of the massive voter turnout initiative ‘Operation Lemonade: Souls to the Polls’ spearheaded by the National Action Network and local black clergy.

Chapter members are taking a stand against the attempts to disenfranchise minority and young voters across the state. Civic engagement committee chair Vanessa Woodard Byers also said members want to send a larger message to voters that apathy is untenable, given the heavy price paid by people who were arrested, maimed or killed seeking the right to vote. “Every eligible citizen should vote,” Byers said. “We owe it to our ancestors and women to cast a ballot in every election.”

Gamma Zeta Omega President Sandra L. Jackson said the demonstration is one of the ways the chapter uses to empower the community. “We want to improve conditions for everyone in Miami-Dade County, particularly the neighborhoods that we serve. Voting is a way we can improve our conditions."

WHAT:  “No Vote, No Voice” silent demonstration