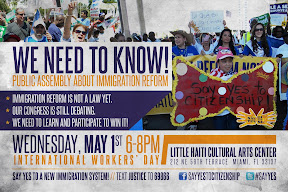 Miami, FL – Immigrant and workers rights organizations, advocacy groups and community organizations will hold a public assembly to inform the community about the Immigration Reform bill currently being debated in the Senate, and engage Miamians to actively participate and demand Congress a new immigration system this year.

“Immigration Reform is not a law yet, and we have to keep participating to make it become a reality for thousands of Floridians and millions of aspiring American families,” says Kathy Bird, from the Florida Immigrant Coalition, one of the organizers of the event. “After the Senate’s Gang of 8 filed their proposal for Immigration Reform, many in our community were confused and thought it had passed… it has not! Now more than ever everyone needs to participate actively and reach out to our Members of Congress until Immigration Reform becomes a law.”

The event will be held on May 1st to commemorate International Workers’ Day. This date has become a tradition for immigrant workers in the United States, who have come to this country to work and earn a better future for their families.

“Work unites us all. America was built by our hard work and we take pride in it. However, the most humble of our immigrant workers are the least protected in our country, and are often victims of abuse, unpaid salaries and inhumane working conditions.” says Andy Mates, President of the South Florida AFL-CIO. “A real and comprehensive Immigration Reform will give an opportunity and help protect immigrant workers who wake up every day to collect our food, serve our hotels and restaurants, build our houses, open businesses and create jobs, and even make incredible contributions to science and technology.”

The Public Assembly will be open for all members of the community. Translation to Spanish and Kreyol will be provided.