The pageant was held in the Gen. Daniel “Chappie” James Center for Aerospace Science and Health Education and was judged by an independent panel. The traditional event began with an invocation, followed by a welcome, and a stylish opening dance performance by the contestants.

Harrison, a junior majoring in elementary education from Spartanburg, S.C., is the daughter of Charlton Dawkins Williams and Rayfield Harrison. She is the the 84th Miss Tuskegee University and ran on the platform, “The Dash: Paying it forward.” Harrison competed against two other contestants in areas that highlighted the young women's oratorical skills, talent, poise and appearance.

First attendant, Courtney Degraffenreid-Elliot of Tuscaloosa, Ala. and second attendant, Scotti Michele Rowser of Gadsden, Ala., will serve as the new Miss Tuskegee University’s court.

Miss Tuskegee 2012-2013 Alexandria Wilson gave her farewell address, former Miss Tuskegee Breana Watkins served as the mistress of ceremony. There were also performances by the men and women's glee clubs.

Other contestants included April Baldwin of Birmingham, Ala.; Breyon Phillips of Marietta, Ga.; Breanna D. Warren of Eufaula, Ala.; Ashlyn Goodwin of Selma, Ala.; and Ashley Hay of Tuskegee, Ala. 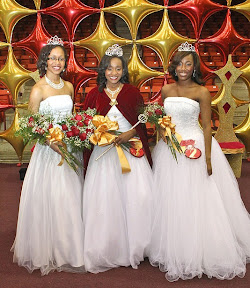