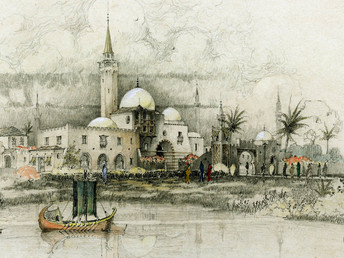 Courtesy of University of Miami Libraries, Special Collections Division, Bernhardt Muller Collection.
Opa-locka: Mirage City explores one of South Florida’s most unique architectural communities. Based on stories and names of characters from the Arabian Tales, Opa-locka presents itself as both eccentric dream; an exotic Middle-eastern urban oasis in a subtropical paradise, and tourist’s kitsch; an architectural conceit more akin to a Hollywood film set. Founded in the 1920s in an undeveloped area of northwest Miami-Dade, the city is a highly romanticized interpretation of an exotic cultural milieu popularized by Hollywood films and archeological discoveries of its time. The exhibition presents original drawings and architectural models that reintroduce the original fabled vision, aiming to rouse interest in the city’s iconic structural design and encourage efforts to preserve its endangered architectural heritage.

Join HistoryMiami for the opening of Opa-locka: Mirage City, June 27 at 6pm. The reception is free to the public. RSVP to 305-375-5356 or rsvp@historymiami.org.

Cool, im going to the History museum exhibit. Vazquez did a great exhibit on Miami Bungalow houses a few years back. RSVP for the opening, free.