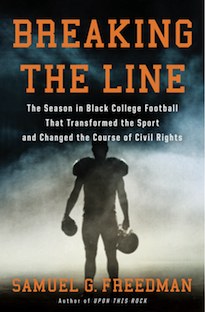 The road to a landmark achievement was one little known in white America and shrouded by the passage of time even to many blacks.


Yesterday’s print edition of The Miami Herald includes an article and photos on black college football and its impact on civil rights. Please check out Section L, Issues and Ideas, for the article by Samuel G. Freedman, author of Breaking the Line: The Season in Black College Football That Transformed the Sport and Changed the Course of Civil Rights

Before the Miami Dolphins and University of Miami fielded winning football teams, before FIU existed and before there were so many distractions for folks' time and money in South Florida, there was the Orange Blossom Classic in Miami’s Orange Bowl Stadium Blacks and whites came to see the game, in segregated sections, and enjoy FAMU’s marching band. The destruction of the Orange Bowl Stadium to make way for the Marlins Stadium razed a lot more than a stadium, it was a significant part of black culture not just in Miami, but throughout the nation.

Freedman will be speaking on Wednesday, September 18, 7:30 p.m., at the Wolfe Center at FIU’s north campus and at Books & Books in Coral Gables, on Thursday, September 19, 8 p.m. I'm taking my Dad since he actually played football at FAMU back in the day. No matter how warm it is on Wednesday evening, he will probably wear his FAMU football jacket.

The unfortunate by-product of breaking the color line in football led to black college football being relegated to second-class status in the minds of many. Books such as Breaking the Line provide an opportunity to expand family discussions of athletics from more than just a "means of getting out of the ghetto and making money" to an appreciation and respect for those who paved the way for athletes today.

Here’s an excerpt from the prologue of Breaking the Line:

In the tumultuous moments after the 2007 Super Bowl ended, the two contending coaches met at midfield. Standing only inches apart, the bills of then they embraced. Tony Dungy of the Indianapolis Colts and Lovie Smith of the Chicago Bears had been colleagues for five earlier years on the staff of the Tampa Bay Buccaneers. They were friends who spoke by phone almost weekly. They shared a fervent Christian faith. And what ultimately bound them together on this rainy February night was the force of history itself.

Dungy and Smith were the first African-American coaches ever to lead a team into the Super Bowl, the most-watched game in the nation’s most popular sport, virtually a civic holiday for tens of millions of americans. While there were necessarily a winer and a loser in the game --- Dungy’s Colts had beaten Smith’s Bears 29-17 ---the adversaries were allies in the urgent and ongoing endeavor of bringing racial equality to sports and through sports to American society.

The road to their landmark achievement, however, was one little known in white America and shrouded by the passage of time even to many blacks. It started in 1837, when a group of Quakers founded a school in Philadelphia called the Institute of Colored Youth, which was subsequently expanded into a college and renamed Cheyney University. Over the succeeding decades, more than one hundred other colleges and universities for black students arose in the United States, with the vast majority of those institutions springing up in the South after the Civil War. Some of them were founded by white philanthropists or liberal religious denominations with an idealistic commitment to educating and elevating a formerly enslaved people. Many others, however, were created by governors and legislatures in the South as a means of preserving the iron rule of segregation and inequality in public schools.