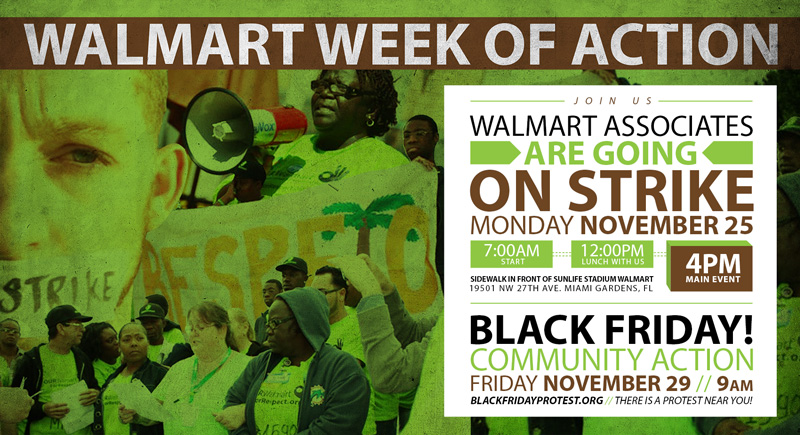 Walmart workers are asking for community support as they bring local attention to their plight with one of the nation's largest retailers. A protest is scheduled for Monday, Novermber 25, 2013 at 4 PM, at the Walmart store in Miami Gardens near Sun Life Stadium. The address is 19501 NW 27 Avenue.

Walmart and other corporate giants such as McDonald's have been in the news for the low wages paid to their workers. Walmart workers and communities throughout America have their owns plans leading up to Black Friday. Thousands of protests are planned around the country to demand that Walmart does right by its workers and customers.

In what is set to be one of the largest mobilizations of working families in American history, workers are calling for an end to illegal retaliation, improved labor standards, more full time work and better wages. As the country’s largest retailer and employer, Walmart makes more than $17 billion in profits, with the wealth of the Walton family totaling over $144.7 billion – equal to that of 42% of Americans.

Listen to Walmart workers in Hialeah who, last month, led an amazing walk out in protest.