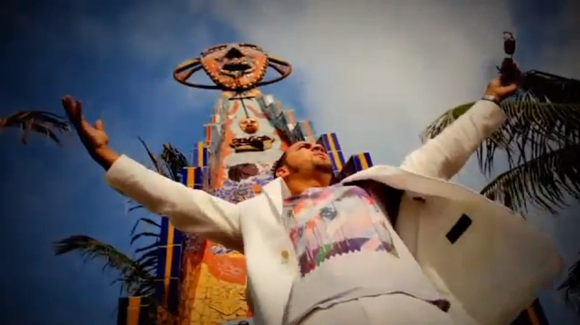 South Florida debut of the film, The Art of Life, Friday, 12/20/2013, 10p.m., Little Haiti Cultural Center
Moving the Lives of Kids Art Center (MLK Mural) is pleased to present the “Art of Life” as part of Rhythm Foundation and Little Haiti Cultural Center Big Night in Little Haiti. The film will be shown at the Little Haiti Cultural Center Theater located at 212 NE 59th Terrace, Miami, FL 33137.
The feature length film is the directorial debut of mural artist, and Executive Director of MLK Mural, Kyle Holbrook. The film screening will be followed by a special performance by Woffgang playing his original track from the score of the movie.
Many young men and women living in neighborhoods across America suffer the absence of a path or a toolkit for survival. Sometimes that toolkit is there, but they just need a guide or an angel to show it to them. In the “Art of Life” the two lead characters Chay and Cheyanne, are looking for a way out of the suffocating pain and misery of their surroundings, but they need a plan. As both develop their artistic skills, their future prospects grow brighter, even if their present environment maintains its darkness. Will they be able to escape to the light? In this story, which blends the magic of cinema, animation, sketches, paintings and music, we learn that art is all around us, and realizing this could help make survival more vividly apparent to those trapped in the dark.
This unique organic and artistic film features scenes shot inside a County Jail, in the middle of the marches during the G20 Summit, and on site during the production of several MLK Mural Projects around the world. “Art of Life” also features several original pieces by MLK Mural artists woven into scenes as animation.
Official website: www.artoflifethemovie.com
If You go:
WHAT:           Debut of “Art of Life” film, followed by performance by Woffgang
WHERE:        Little Haiti Cultural Center
212 NE 59th Terrace
Miami, FL 33137
WHEN:          Friday, December 20, 2013
10:00pm  – Midnight
Admission:   FREE