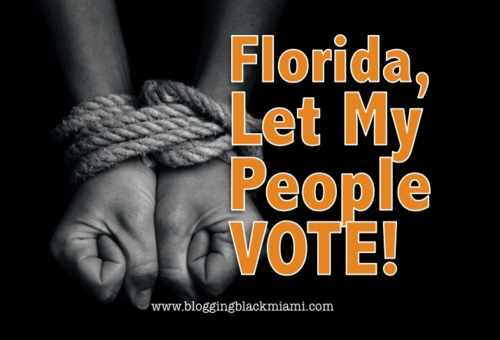 Faith leaders from across Florida and the nation will gather at the office of Florida's Attorney General Pam Bondi on Friday, January 17, 2014 to demand reform of civil rights restoration for Floridians with past felony convictions, to recommend policy changes, to announce a plan to unite multi-faith congregations and the families of returning citizens around the issues and to pray.

At 10:00 a.m. ET, leaders from the Florida Rights Restoration Coalition (FRRC) as well as clergy and returning citizens will stand together on the third floor of the building housing the Attorney General's Tampa office to call attention to the fact that Florida is one of only three states to impose lifetime disfranchisement upon conviction of a felony.

The faith leaders will assemble at the Attorney General's Tampa Office to:

1. Raise awareness about how the current clemency have a negative impact on returning citizens;

3. Personally deliver a request that Attorney General Pam Bondi meet with key religious leaders and impacted individuals to discuss to need for reform; and

4. Announce plans to unite multi-faith congregations throughout Florida to support clemency changes based on the faith principles of forgiveness, redemption, and restoration.

Under new restrictions passed by Florida Governor Rick Scott's administration, anyone convicted of a felony must wait between five to seven years upon completion of all portions of their sentence probation before they are allowed to apply to have their civil rights restored. There is an additional application processing time of approximately six years, bringing a total wait time of 11-13 years. Even after waiting 11-13 years, based on the current pattern for rights restoration, an individual has less than 1% chance of having their civil rights restored.

What: Press conference by clergy, leaders and returning citizens at the office of Floridas Attorney General Pam Bondi to demand reform of restoration of civil rights for Floridians with past felony convictions, to recommend policy changes and to announce a plan to unite multi-faith congregations and families of returning citizens around rights restoration.

Who: Clergy, returning citizens, leaders from across the nation and the state of Florida and representatives from the PICO's Lifeline to Healing Campaign, FRRC, NAACP, and ACLU.

The New Black: What Has Changed--and What Has Not--with Race in America

There's something I really enjoy about your blog page.
I felt compelled to add it to my Favourites. I am sometimes stupid like that.