The New Florida Majority: Help Us Save The Voting Rights Act! 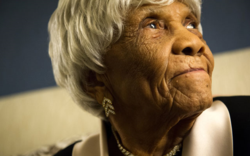 Last week we commemorated the 50th anniversary of the Voting Rights Act, we also had memories of just two years ago when Florida resident, Desiline Victor was almost denied her right to vote because of intentional voter suppression laws. We honor and pay homage to those who fought a tireless battle for the basic democratic right to vote. With that honor, we are inspired to make sure we aren't fighting this same fight in the next 50 years to come.

On October 28th, 2013, Desiline Victor set out to participate in early voting at North Miami Library. During her three hour wait to vote, poll workers instructed her to come back later. Mrs. Victor, who at the time was 102 years old, was told she could have to wait in line for up to six hours. It wasn’t until late evening that Desiline Victor was able to cast her ballot. To us, Desiline Victor is an unsung hero and an example of why we will not shy away or be hushed about voter suppression.

"Two years later and we’re still here."  One of her sons, Mathieu Pierre Louis reflects on the events of that day, “I’m the one who dropped her off there, and was going to pick her up. And she told me about it. She said, ‘I can’t vote. They won’t let me vote because they are too many people in the line’. If we’re going to celebrate the anniversary of voting rights, something needs to be changed. I want something to be changed for my mother. She’s still alive, the next elections are coming up and God willing she will make it to vote again.”

Last week, President Barack Obama said, "It [Voting Rights Act] broke down legal barriers at the State level and local level that kept African-Americans from being able to vote." With the countless stories of disenfranchisement, we acknowledge not much has changed and without the VRA there will be efforts to suppress the votes of people of color and the poor. By restoring the Voting Rights Act, we can protect voters in Southern States from discriminatory changes in voting procedures.

The most discriminated states, Alabama, Arkansas, Arizona, California, Florida, Georgia, Louisiana, Mississippi, New York, North Carolina, South Carolina, Texas, and Virginia would all be immediately covered and would have to submit any changes in voting to the U.S. Department of Justice or a federal court, to prove that they would not be discriminatory. Once again, changes in voting procedures would be frozen until they are “precleared” and not test-driven during elections.

WILL YOU JOIN US?