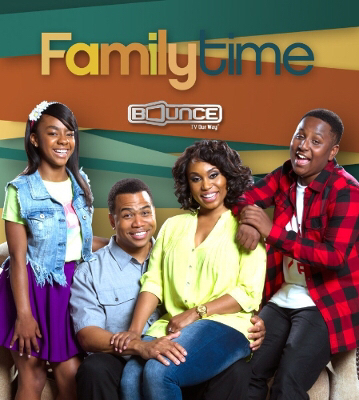 Season three of Family Time has been bucking television trends by consistently growing in audience and popularity every week, with new episodes premiering on Bounce TV Tuesday nights . The show comedically chronicles the lives of the Stallworths who relocated to the suburbs, headed by the dad Tony Stallworth (Omar Gooding), a struggling general contractor, and his wife Lisa (Angell Conwell), an unfulfilled stay-at-home mom. The half-hour situation comedy was created by Bentley Kyle Evans (The Jamie Foxx Show, Martin) and is produced by Evans and partner Trenton Gumbs (Love That Girl). at 9:00 p.m. (ET)

The new record-setting episode centered around the Stallworths renting out rooms in their house temporarily to make some extra money, only to find themselves in a few tricky situations. GRAMMY Award®-winning artist, songwriter, actress Michelle Williams guest starred in the episode as an undercover FBI agent posing as a renter. The episode encores Nov. 22 (11:00 a.m.) and ) All times Eastern.Nov. 23 (9:00 p.m.

Bounce TV is the fastest-growing African-American (AA) network on television and airs on the broadcast signals of local television stations and corresponding cable carriage. The network features a programming mix of original and off-network series, theatrical motion pictures, specials, live sports and more. Bounce TV has grown to be available in more than 85 million homes across 90 markets and 90% of African American television homes -- including all of the top AA television markets. Among the founders of Bounce TV are iconic American figures Martin Luther King, III and Ambassador Andrew Young.