Blogging Black Miami
[WARNING: EXPLICIT LANGUAGE] Why We Can’t Ignore Racism and the Palmetto Lacrosse Team
Senseless Gun Violence in Miami: Is this the new normal?

Where Do We Go from Here?: Racism and the Palmetto High Lacrosse Team 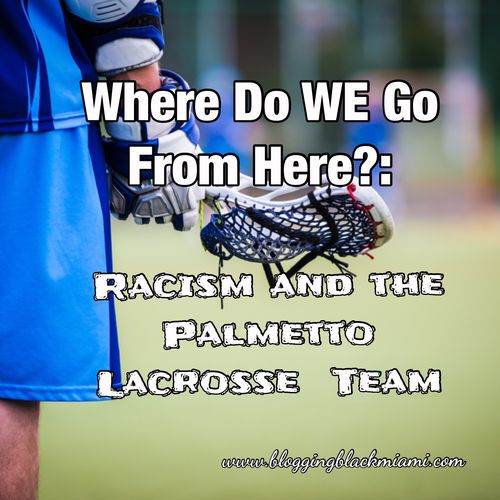 Thank you for your feedback on my original commentary on the racist internet chat incident among Palmetto High lacrosse players. Because of that incident, my friend Eric Pettus, who is a lacrosse enthusiast, former collegiate player and coach, shared his experience with a former Palmetto High lacrosse coach. Let me reiterate this was a former Palmetto Lacrosse coach, not anyone on the current coaching staff. Children live what they learn…

In the late nineties I decided that I'd volunteer to coach Lacrosse at a public high school in Miami and I called Palmetto High. I gave the coach via telephone my Lacrosse Playing Resume (which started at the age of 10 and lasted until age 40). Long story short, the coach invited me to come and meet him at the team’s game that day. They were playing Ransom Everglades Academy in Coconut Grove. My office at the time was in Coral Gables just across US 1. The coach (not the current coach) gave me directions and while doing so advised me not to stop my car in the black neighborhood. Needless to say when I showed up as a black man and announced that I made sure not to stop in the black neighborhood he was quite embarrassed. Open mouth insert foot and crawl under the table embarrassed. I didn't let his ignorance stop me from volunteering I volunteered at Ransom Everglades!!!

I’m sure coach thought he was protecting Pettus who he thought was white. Surely he might have been attacked had he stopped in the black neighborhood. Obviously, Eric Pettus didn’t ‘sound’ black to the coach. Surely no black person would have so much experience in lacrosse, right? Wrong.

Again, though uncomfortable and embarrassing to many, this is a teachable moment. We can allow this to swept under the rug or we can talk openly and honestly about race. The incident at Palmetto High is not likely an isolated one in our schools throughout this country. Once the Palmetto incident became public, the school district should have held a town hall meeting to inform the public on actions it has taken and answered questions of concerned residents. This is a serious matter. Don’t forget that in addition to the racist remarks, threats to kill were made.

There is a passionate exchange of viewpoints regarding this situation on the Facebook page of Around Pinecrest. Some commenters, who know the boys, say the boys are not racist, they were following others, etc. etc. etc. Newsflash, the boys either made racist comments or went along with the racist comments. Did any of them show support for the one black player on the team who spoke up about the offensive chat? If they didn’t, that makes them cowardly racists. Those children knew better. Let’s acknowledge the truth and move on from there. On the other hand, Pinecrest Mayor Cindy Lerner, who I admired even before this incident, is livid and thinks the team should be suspended for a year.

Unfortunately, there are many perfectly innocent Palmetto students who have nothing to do with hate speech, who will be painted with the broad brush of being perceived as racist. I was reminded that only 8 of the 40 players on the Palmetto lacrosse team were involved in this incident. Hopefully the remainder of the team and the student body outraged by the comments of their schoolmates, will learn from this also. All of the students need to understand that this situation is NOT about “dumb actions” or “social media responsibility.” This situation is about racism. Period. “The Holocaust illustrates the consequences of prejudice, racism and stereotyping on a society. It forces us to examine the responsibilities of citizenship and confront the powerful ramifications of indifference and inaction.” - Tim Holden

In your own words you indicate thar it wasn't the entire lacrosse team yet you name your blog in a manner that implicates the entire team. How responsible is that? I understand discusiing how students these days do not comsider the implications of their words. But as you said these are children and we are foolish to simply fall back and say they should know better. Assuming is what gets many people on trouble. We should be educating our children at all times, not just condemning them and looking to be punotive. You bring up valid points at the expense of an entire group that does not deserve to be targeted. Isn't that what you are standong up against?