Blogging Black Miami
UPDATE: A'Miya Renee Feagin has been found!
Where Do We Go from Here?: Racism and the Palmetto High Lacrosse Team

[WARNING: EXPLICIT LANGUAGE] Why We Can’t Ignore Racism and the Palmetto Lacrosse Team

(There are several pictures on this post that may take a long time to load.) 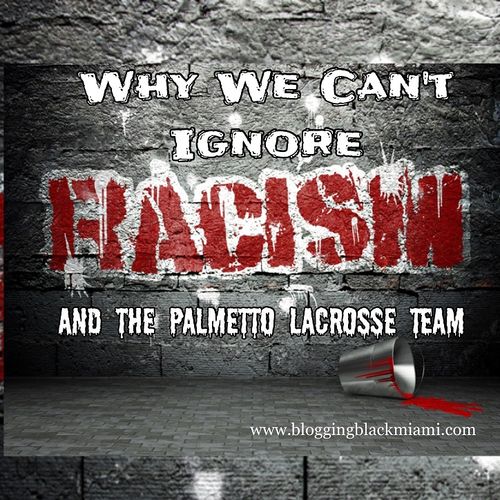 Children live what they learn. Even in the exclusive, wealthy area of exquisitely gorgeous homes and perfectly manicured lawns of Pinecrest and Palmetto Bay, Florida, racism and lives and is perpetuated. We know this because of screenshots of excerpts of a GroupMe chat between some Miami Palmetto Senior High School lacrosse players that has been shared on social media. 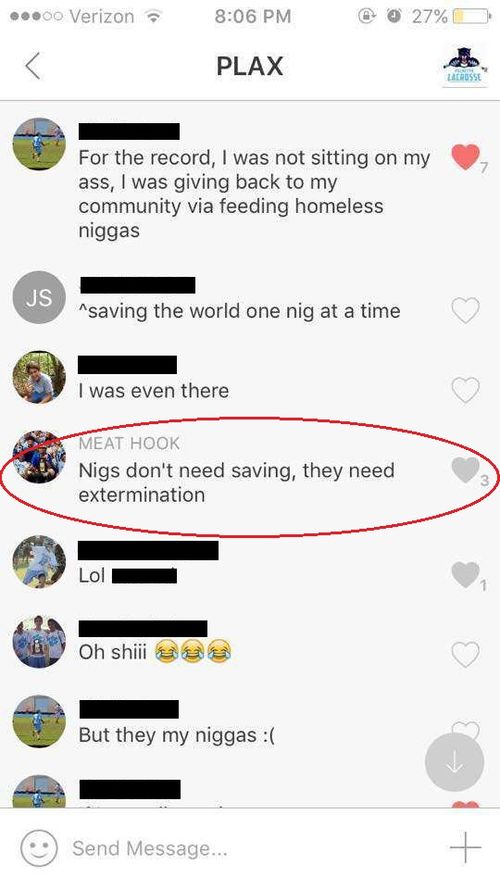 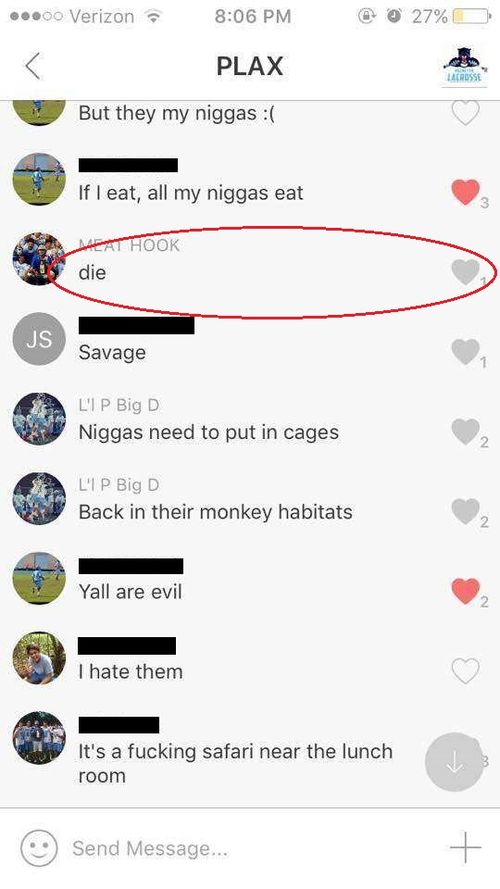 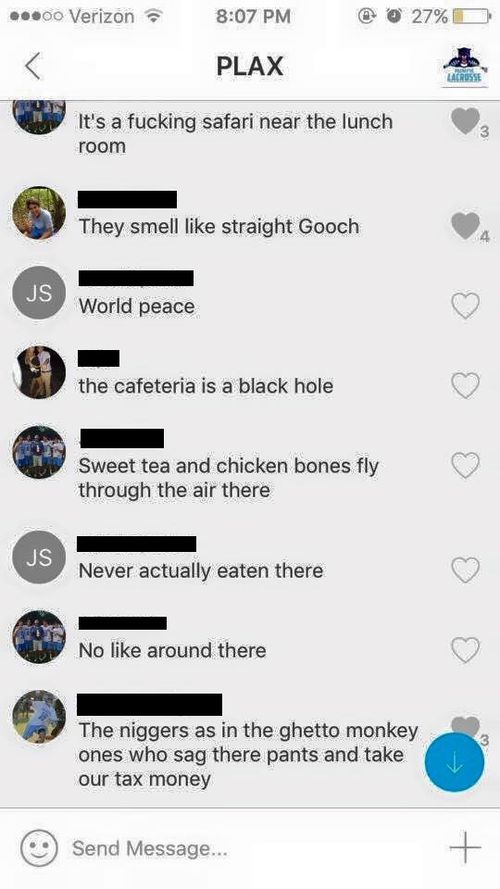 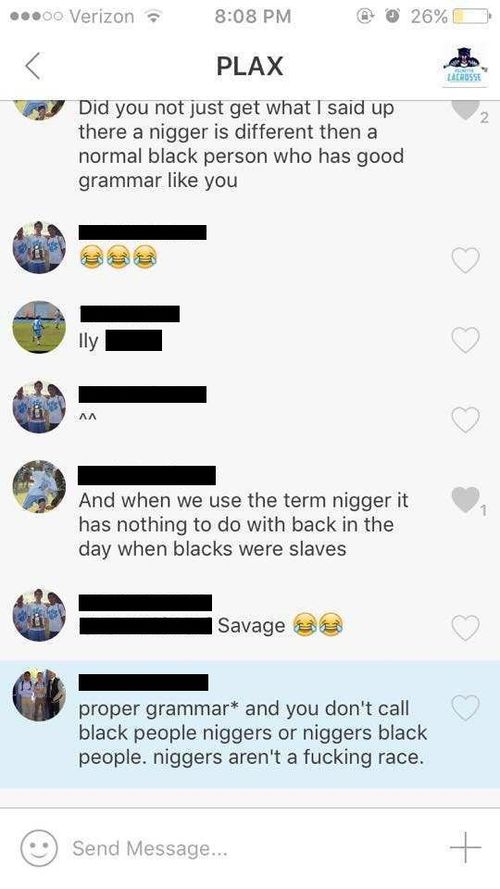 Throughout the chat, the students cavalierly and hatefully drop the ‘n-bomb’ many times. Please take note of the attempt to distinguish between black people and niggers. The conversation is vile yet eye-opening. Some of the students have claimed to be friends with black students yet their hearts feel otherwise. Reality check. That’s the way the world is and it’s not likely to change. When children make reference to ghetto monkeys taking their tax dollars, you know they are regurgitating comments they’ve heard from adults.

After high school, these same young men that engaged in the conversation --- all white, except one black student --- are more likely to become doctors, lawyers, politicians and business owners than black children. Their decisions could affect the daily lives of many people that they think should be in cages or go back to their monkey habitats. And some folks take issue with the #BlackLivesMatter movement? If you are black, you feel the frustration of the black team member who tries to put the others in check for racists comments that have obviously been made before.

Some people, even black people, prefer to ignore race and racism. “After reviewing what has taken place at Palmetto High, I think it is time to have a conversation,” said Andre Joyce, whose team “the hope dealers” will discuss the issue tomorrow at 11 a.m. on 880 AM THE BIZ . “We will spend a portion of our time on the show talking about how the school and school system can address this matter. Additionally, we will spend some time talking with experts about the race and its effect on teenagers.” This incident is also on the radar of the local branch of the NAACP and branch president, Dr. Shirley B. Johnson has already notified Miami-Dade County Public Schools accordingly. The school district administration met with students on Monday to deal with the incident. The principal, Victoria Dobbs, posted a message about the incident on the school's website.

While I despise the racist rhetoric of the lacrosse players, the hateful, terroristic threats regarding killing blacks are the most egregious and deserving of consequences more severe than ‘counseling’ provided to the eight young men identified as conversation participants. The school district’s new emphasis on reducing the number of suspensions will likely preclude that as an option for punishment, especially for these students. If suspension is not an option, the young men should be required to do community service and the district should provide them mandatory racial sensitivity training.

While this article is about a private internet group chat among Miami Palmetto Senior High School students, rest assured, it is likely not an isolated incident in our schools throughout this nation. Schools are microcosms of our society. When our nation’s first black president is openly disrespected and blacks are subjected to police brutality with alarming frequency, why should we really expect anything different than the conversation of the Palmetto lacrosse players. Children live what they learn.

I just want to say I go to school there, and our school is outraged by this. This is a terrible representation of our school. For those who make a quick judgment about our school, don't. These racist students are facing consequences.

Melanie, what consequences are they facing?

I have written the below letter requesting a call to action by Palmetto High School Administration. As an alumna (Class of 1994) where I was Senior Class President, my fellow alums and I are downright outraged by the lack of action from the school! I have emailed this letter to Principal Dobbs, to the office of Superintendent Carvalho, posted on the Miami Palmetto Senior High Alumni Facebook page, as well as other media outlets. We cannot allow this ignorance and violent rhetoric to go unpunished.
I am encouraging my fellow almuna to request the same of our alma mater.

"November 4, 2015
Principal Victoria Dobbs
Administration, Miami Palmetto Senior High School
7460 SW 118 Street
Miami, FL 33156
Dear Principal Dobbs and Administrative Staff of Miami Palmetto Senior High School,
My name is Yovanna Madhere (formerly Farley), and I am a proud alumna of the class of 1994, which I also served as Senior Class President. I speak on behalf of many members of the class of ’94 as well as other alumni in registering our disgust with the recent racist and violent comments on social media by members of Palmetto’s Lacrosse team. The harm is exacerbated, and we are further disappointed, by the lax attitude and inferior level reprimand demonstrated by the Palmetto High School Administration, as characterized by coverage in The Miami Herald.
As stakeholders who care deeply about the culture and standing of our alma mater but who are, in many cases, now far removed from the institution, we see a lack of concrete consequences for appalling behavior unbefitting student athletes and indeed, members of the Palmetto community. What message does your lack of courage to appropriately address this behavior send to all of your students –in particular those of color? It gives rise to the perception that they are “n*****s to be killed” by their fellow Panthers during a senior prank and that their presence is trivial and unworthy of protection. Are some Panthers more equal than others?
As an Afro-Latina who holds a degree in Social Work and as the mother of two teenagers, I expect much more from an award-winning high school, distinguished in every realm of curricular and extra-curricular achievement, and held in such high regard across Miami-Dade County. My fellow graduates from the mid-90’s, many of whom I am still friends with today, are a diverse and accomplished group (holding high political office, celebrated as entertainers and artists, and contributing to the various professions). We remember Palmetto as a place of inclusion and celebration of our diverse ethnic and racial backgrounds, where departures from these clearly articulated ideals were strongly dealt with and not tacitly allowed.
I understand if the school feels that an emphasis on punishment is the wrong one for a pedagogical institution. However, in that case, we alumni and other stakeholders need to hear much more about what measures are being taken by the school to redress this shocking breach of the norms of community. We would like for the 8 students to formally apologize to the Palmetto student body (particularly those of color) via all social media platforms, as their threats besmirches the Palmetto name. We also call for a 2 game Lacrosse suspension of the young men involved. We believe that these athletes should understand the severity of their behavior and experience similar penalties as the professional athletes they look up to. There is both a substantive problem and a problem of optics. Readers of the city’s newspaper of record should not be left with the impression that the school lets such an affront slide. I write this letter to underscore that your actions (or lack thereof) are not going unnoticed.
Please live up to the Palmetto Panther spirit by setting the right example and doing the right thing!
Very Sincerely,
Yovanna L. (Farley) Madhere'

Please know that this team consists of nearly 40 young men, most of whom have already expressed that they are equally horrified at the comments published in these screen shots. Those innocent boys, who were not engaged in this offensive conversation nor tolerate this language on the field, are feeling threatened as a result of the generalizations being tossed out by schoolmates and the "press". Meanwhile those identified by the school have in fact been suspended. While we address what needs to be improved, let's not judge a team of students by the intolerable actions of a few.

Mrs. Madhere', thank you for taking action and for sharing your letter. I agree with all of your points.

Duly noted. Leanne, that is one of my points in today's commentary. It is unfair to the students who have nothing to do with this incident to be painted with a broad brush.

To Palmetto Senior High, School Board, and Community:
I too am a graduate of Palmetto class of 1985 and currently have a son and many of my former classmates also have kids who attend this culture diverse school in one of the most politically backed communities here in Dade County. I spoke to the principal and do agree with the letter very well written by Mrs. Madhere. I'm currently in law enforcement and I don't think the reactions of the school and school board are swift enough and informing to the student body, and community at large. I agree there definitely needs to be a suspension for most of these kids involved in the group chat and I emphasize "most" not necessarily all. What I do see there needs to be for sure some sensitivity training for the group/student body at large and this need to be ongoing. D

My concern is the lack of damage control and swift informing the community at large now invites the students who are in fear for their safety to now take matters into their own hands by bringing other weapons onto school ground which effects everyone. Seeing the effects of how we deal with situations within the communities we have found that constant communication and swift actions will keep a calming effect during such a potential time.