Will & Heather Packer Host Private, A-List Screening of Nate Parker's 'The Birth of a Nation' 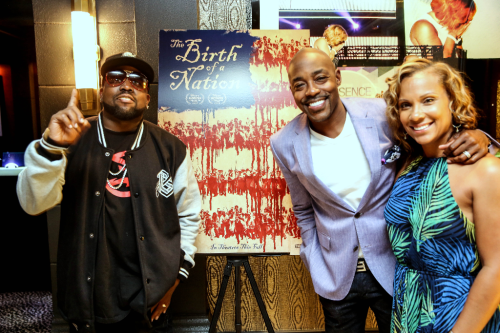 Rapper/actor Big Boi, left, with Will and Heather Packer at private screening of Nate Parker's 'Birth of A Nation'

(ATLANTA) Famed film producer, Will Packer, and his wife, Heather Packer, hosted a private A-list screening of the upcoming Nate Parker film, The Birth of a Nation, at their home in Atlanta, GA.

The evening kicked off with a light reception, complete with full bar and passed hors d’oeuvres, and transitioned into the Packer House theater where Will and Heather welcomed guests into their home and shared why they felt it necessary to host this film. They also spoke about the importance of historical presentations like his mini-series reboot of Roots and The Birth of a Nation.  Liquid Soul CEO, Tirrell Whittley, then took the stage and thanked everyone for being at the forefront of support for this amazing film.

Set against the antebellum South, The Birth of a Nation follows Nat Turner (Nate Parker), a literate slave and preacher, whose financially strained owner, Samuel Turner (Armie Hammer), accepts an offer to use Nat’s preaching to subdue unruly slaves. As he witnesses countless atrocities - against himself and his fellow slaves - Nat orchestrates an uprising in the hopes of leading his people to freedom. Cast: Nate Parker, Aja Naomi King, Gabrielle Union, Colman Domingo, Aunjanue Ellis.

The Birth of a Nation opens nationwide on October 7.

The Birth of Nation - Will Packer Private Screening from LIQUID SOUL on Vimeo.