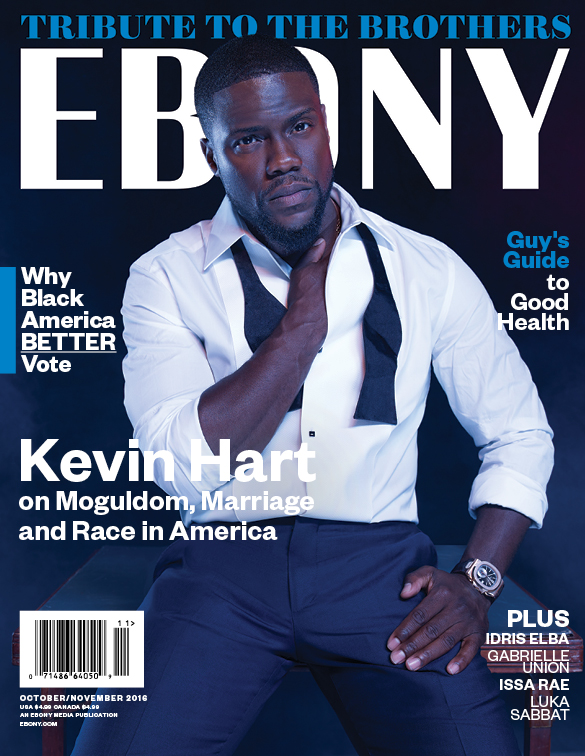 CHICAGO (Sep. 29, 2016)— KEVIN HART rakes in millions touring the world doing stand-up and dominates the box office with his films. The secret to his success is … well, it’s no secret. Whether spitting bars as satirical battle rapper “Chocolate Droppa” or doing viral dances for the ‘Gram, Hart knows how to keep us entertained.  But he’s dead serious when it comes to his empire, and he’s become the first comedian to unseat Jerry Seinfeld at the top of Forbes’ highest-paid celebrities list.

EBONY goes one-on-one with the mogul to learn more about the challenges he faced during his climb to the top; the importance he places on marriage and being a family man; and his upcoming stand-up comedy film, KEVIN HART: WHAT NOW? Hart also opens up on hot topics including why he isn’t more outwardly “political” during a time when many celebrities are taking sides in the #allivesmatter and #blacklivesmatter debate.

“I love my people.  I have never not stood by my people and by my race,” the comic declares. “I love representing my race all over the world at the highest level where people have to look and go, ‘Hey man, that strong Black man right there is a smart individual.  He’s got it together; he’s trying to do some positive things.”

Speaking of positivity, the 2016 Men’s Issue is specifically devoted to uplifting Black men.

“This is one of my favorite editions of the year because we shine a much-needed spotlight on the upcoming November election as well as the issues affecting a group of human beings I truly love: Black men,” explains EBONY Editor-in-Chief and Senior Vice President, Head of Digital Editorial Kyra Kyles.  “We are so tired of reading negative stories about our brothers, fathers, husbands, sons, cousins and friends, so this issue highlights awe-inspiring gentlemen making a positive change in their communities and offers self-care tips specific to the fellas.”

In addition to the articles on Hart, Idris Elba and Issa Rae, readers will find a comprehensive voters guide; a 20-year retrospective on the debut albums of Lil’ Kim and Foxy Brown; and an in-depth interview with Abraham Bolden, the first Black Secret Service agent to protect a U.S. president .

For more, pick up the October/November 2016 issue of EBONY, which is coming to a newsstand near you.  And to get more Hart, watch the hilarious behind-the-scenes video on Ebony.com. Read and join the conversation on social media using #EbonyHartsKevin