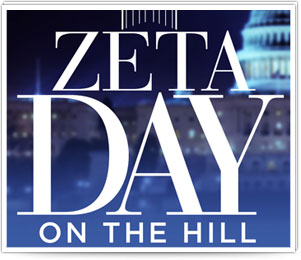 WASHINGTON, Sept. 13, 2016 /PRNewswire-USNewswire/ -- Today Zeta Phi Beta Sorority, Incorporated will convene in Washington D.C. for Zeta Day on the Hill (ZDOTH) 2016. ZDOTH will provide community leaders from 15 states a platform to voice their concerns on issues that affect minority communities across the United States.  This day-long event informs attendees how to make significant policy changes in their communities by getting engaged in government.

The theme of this year's ZDOTH will be "Unleash Your Superpower: Vote. Advocate. Run." Preceding the 46th Annual Legislative Conference hosted by the Congressional Black Caucus Foundation, ZDOTH will focus its discussion on sharing ways that African Americans can unleash their collective power to drive change in their communities, and ultimately run for political office.

"In 2012, when President Barack Obama was re-elected, African American women were 33% more likely than any other sub-group to vote," said Dr. Mary Breaux Wright, Zeta International President. "Our power goes far beyond our vote. Zeta is demonstrating how community leaders can take their rightful seat at the political table and direct the kind of change we want to see in our communities."

Past Zeta International President, Dr. Barbara West Carpenter, a member of the Louisiana State House of Representatives, will be joined by leadership representatives from the NAACP, the White House Council of Women and Girls, the American Association of University Women, and the U.S. Fish and Wildlife Service to host workshops to help Zeta leaders tackle key issues that plague their communities.

The day will culminate with a public community forum, A Seat at the Table: Black Women as Voters, Advocates, and Elected Officials featuring an expert panel of women, including Congresswoman Donna Edwards.

Zeta Day on the Hill will take place at the Holiday Inn Capitol, 550 C Street SW in Washington, D.C.