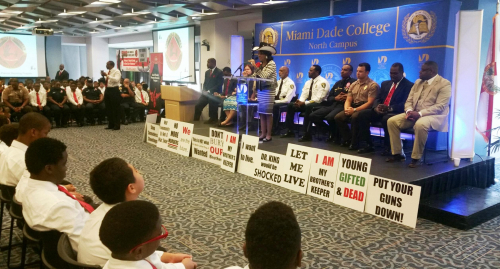 MIAMI, FL – One thousand middle school boys, 300 police officers, and mothers who lost children to gun violence participated in a Police and Youth Conference hosted by The 5000 Role Models of Excellence Project Founder Congresswoman Frederica S. Wilson, on Tuesday, October 25, 2016, at Miami-Dade College North Campus.  The conference concluded with a march led by Congresswoman Wilson to unveil a new billboard sponsored by Clear Channel Outdoor located at 27th Avenue and 106thStreet.  The billboard depicts solidarity between police and youth along with a powerful messaged aimed at ending gun violence.

“I see hope for the future,” said Congresswoman Wilson.  “We all know that there is tension between young boys of color and police officers.  The 5000 Role Models of Excellence Project hosts these annual conferences to foster better relations between police and youth which help ease that tension.”