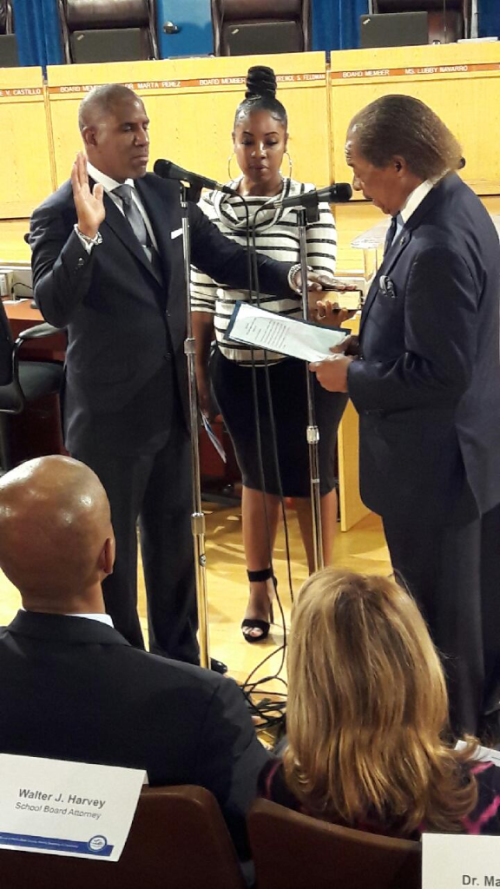 Veteran educator Dr. Steve Gallon III was sworn-in as Miami-Dade County School Board Member for District 1, on Tuesday, November 22, 2016 before a standing room-only audience in the School Board Administration Building Auditorium.

After being sworn-in by his mentor, former School Board chair and retired educator and school district administrator Dr. Solomon C. Stinson, Dr. Gallon delivered rousing and heartfelt remarks from the dais. It would not be an exaggeration to describe it as a Barack Obama-like moment as evidenced by the cheers from the audience.

Congratulations to all of the other newly-elected and re-elected School Board members: Mari Tere Rojas; Lubby Navarro; Dr. Larry Feldman; Dr. Martin Karp and Susie Castillo. The new Board Chair and Vice Chair are Dr. Larry Feldman and Dr. Marta Perez. 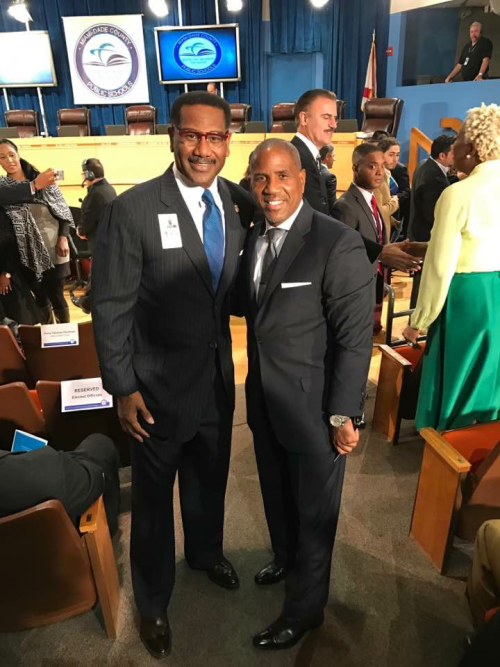 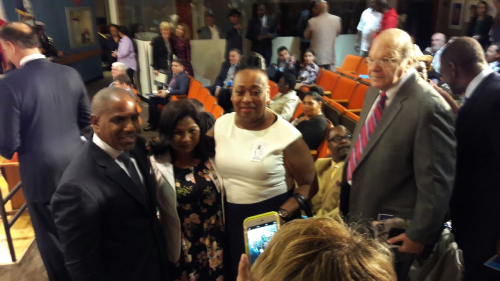 The celebration continued the same evening with a swearing-in ceremony in District 1. During his campaign, Board Member Gallon stressed the importance of community engagement for the students, parents and stakeholders in District 1 which includes Miami Gardens;  North Miami; Opa-Locka; and portions of Miami Lakes and North Miami Beach. 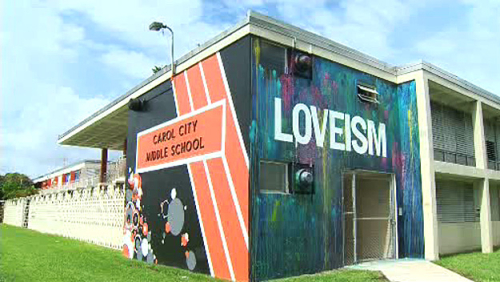 At the community ceremony, Dr. Stinson stood with Dr. Gallon as the oath of office was administered by Dr. Gallon’s daughter, Kastevia Gallon-Martin. Greetings were given by City of Miami Gardens Mayor Oliver Gilbert. Remarks were given by Superintendent Alberto Carvalho. City of North Miami Vice Mayor Alix Desulme made a presentation on behalf of his city.

Kwanzaa in Action: DCS Mentoring Program Gives Back to the Community 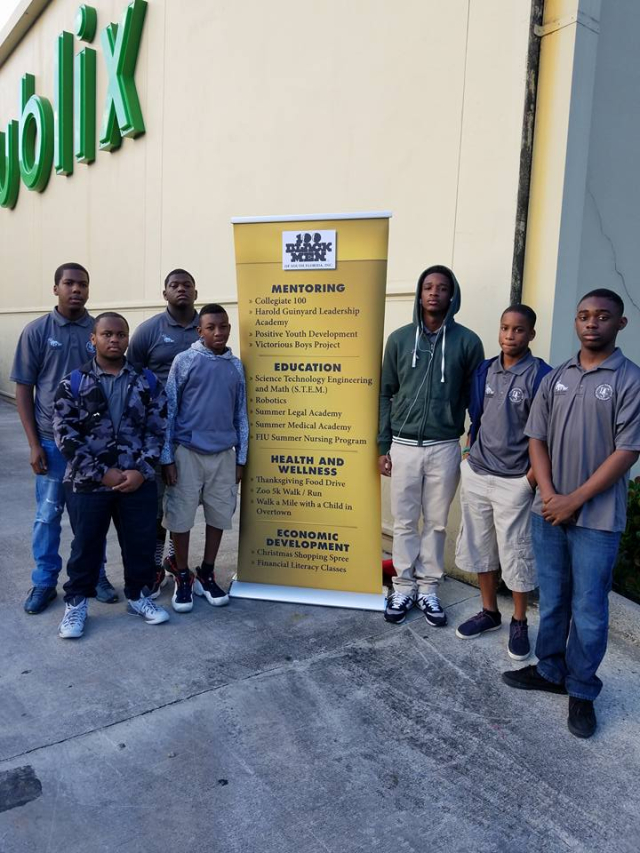 The young men of the DCS Mentoring Program learned a lesson in giving back. The young men, in collaboration with the 100 Black Men of South Florida, arose early last Saturday morning and gathered at Publix in Aventura to pack boxes of Thanksgiving fixings for families in our community. They each selected a deserving family to receive a Thanksgiving basket.

If you are the parent of a young man ages 8-17, you should consider enrolling him in the program. They learn valuable life skills including discipline, etiquette, grooming and personal responsibility. Since its inception in August, the program has expanded to two age groups 8-12 and 13-17 with 50 per age group. Enrollment acceptance is on a first come first served basis. If you are not able to pay the fee in full, the program administrators will work with you.

For more information, call DC Clark at 305.342.5864 or email DCClark88@gmail.com. Sponsors are also needed to help deliver this life-changing and empowering program to young men in our community. 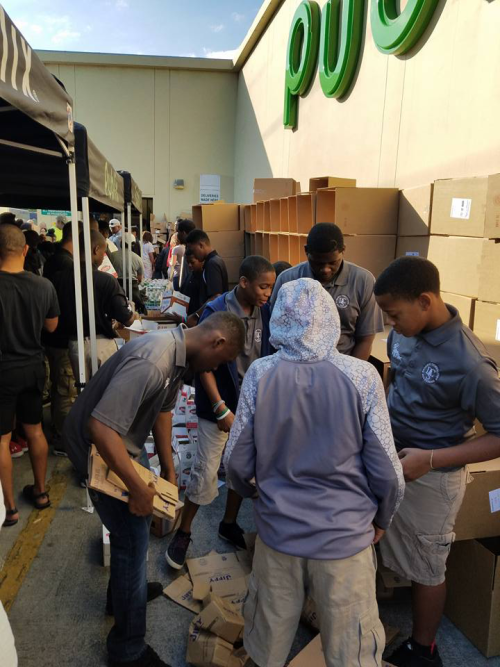 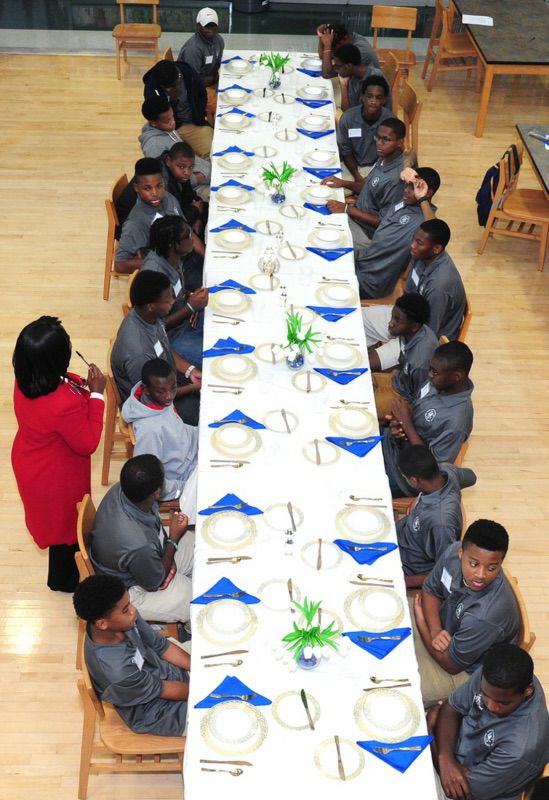 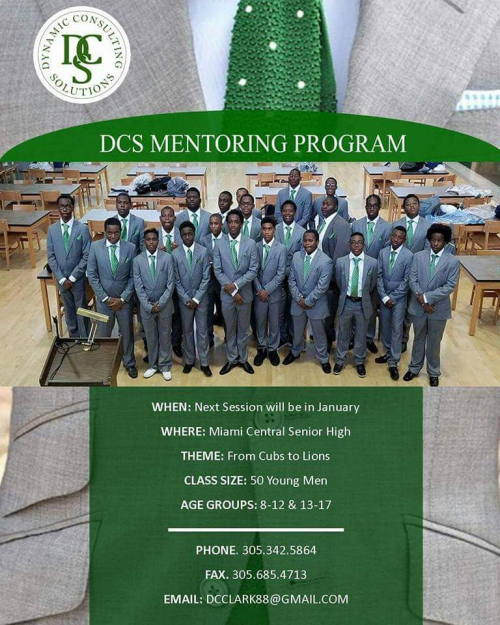 Dr. Steve Gallon III to be sworn in as School Board Member on Tues. 11/22 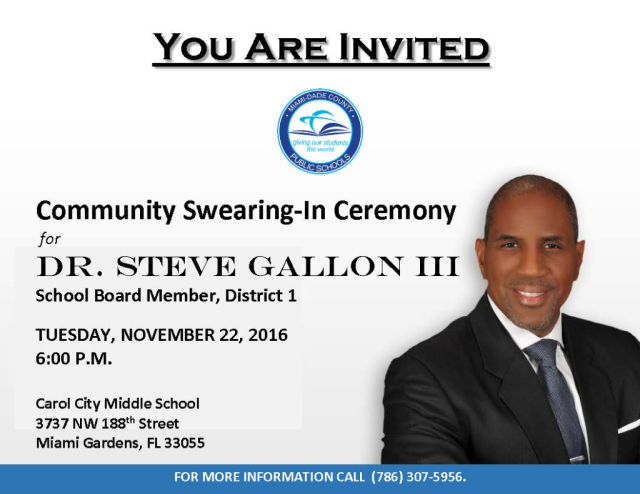 The community is invited to witness the swearing-in of Dr. Steve Gallon III as the member for District 1, School Board of Miami-Dade County. On November 8, 2016, the voters overwhelmingly supported Dr. Gallon’s campaign for change and focus on improving District 1 failing schools. Dr. Gallon will be sworn-in during a public ceremony on Tuesday morning at the School Board Administration Building. However, for the convenience of parents, students and other stakeholders in District 1, a community swearing-in ceremony will be held at 6 p.m., Tuesday, November 22, 2016, at Miami Carol City Middle School, 3737 NW 188th Street, Miami Gardens, FL 33055.

Please share this information with your network of family and friends. For more information call 786-307-5956.

Poitier has been recognized and received numerous awards for service to her church and the community at large. She is also a dedicated member of the South Florida Chapter of the National Alumnae Association of Spelman College; a Golden Life Member of the Miami Alumnae Chapter of Delta Sigma Theta Sorority, Incorporated; and was recently appointed Health and Human Services Chair of the Dade County Chapter of The Links, Incorporated.

Get Out the Vote Block Party in Liberty City Sun. 11/6 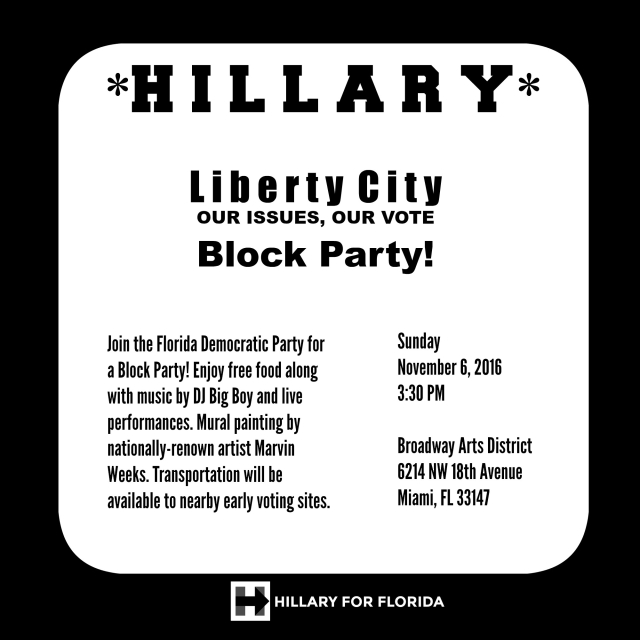 To all my people in Liberty City and all my urban art lovers, on Sunday, November 6, 2016, the Florida Democratic Party and Hillary for Florida will host "Our Issues, Our Vote,” a block party. This event was designed to encourage residents to vote early in the November General Election. The party will be staged in the Broadway Arts District, a local urban art culture oasis of which you may not be aware. There will be music from DJ Big Boy and live performances. Enjoy free food and the talents of nationally-renown artist Marvin Weeks who will add another mural to the landscape of the District.

Sunday is the last day of early voting. Election Day is Tuesday, November 8. Rides will be provided to nearby early voting sites. Spread the word about this event. Thank you. See you there!

“Every election is determined by the people who show up.” ― Larry J. Sabato

Here are our recommendations for the upcoming November 8, 2016 General Election. If you are like many of us, you have had enough of this 2016 election cycle. It is said that politics is a contact sport but this season will be one for the record books.

We are well into the early voting period in Miami-Dade County and tomorrow is the deadline to request a ballot to vote by mail. Please take action and be sure to vote in this election (and every election). It has been reported that the number of Black voters is down. Don't wake up November 9 wallowing in regret. You have heard or read it before, your vote is your voice. Please don't take it lightly. 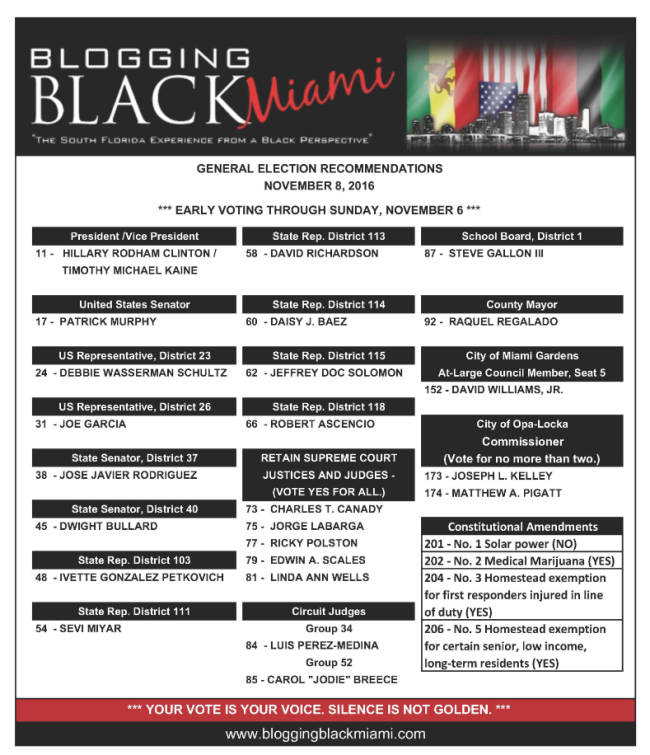