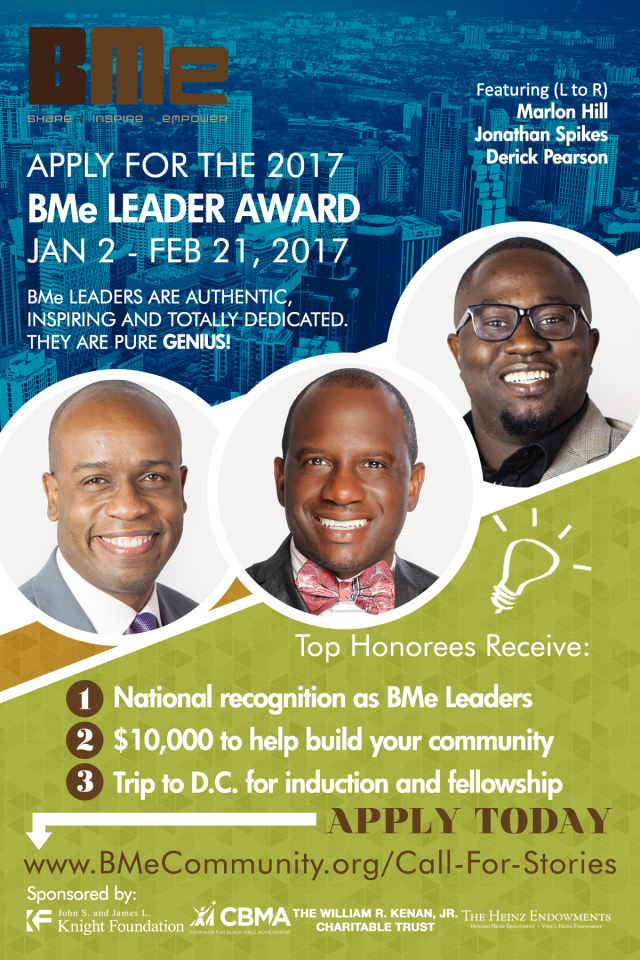 MIAMI, FL – January 2, 2016 – BMe Community wants to reward unsung "Black Men's Genius" in Miami. From now until February 21, black men who share their remarkable stories of creating opportunities for others will have a chance to become BMe Leaders.

The BMe Leader Awards come with national recognition, a $10,000 grant, and travel to Washington DC for induction into a lifelong fellowship of their peers. Men such as:

BMe Leader Derick Pearson who co-founded BlackTech Weekend with his wife Felecia Hatcher to increase the number of startup founders, technology executives and engineers of color. Both are venture-backed entrepreneurs themselves. http://blacktechweek.com/

BMe Leader Jonathan Spikes overcame the violent death of one brother and the shooting of another plus his own cancer diagnosis to show young people a way out of similar traumas. His "Let's Talk It Out" conflict resolution curriculum has been adopted by Miami-Dade Public Schools, one of the largest and most diverse school districts in the US. http://www.jonathanspikes.org/

Compared to other social innovation awards, the BMe Leader application process is short and easy.

BMe scores candidates on the remarkableness of their stories, authenticity, willingness to work with others, community engagement, and diversity of age and fields. BMe is especially interested in those who work to improve health, wealth, know-how and community.

BMe also awards some leaders whom others dare not.

Shaka Senghor in Detroit (2012) and Chris Wilson in Baltimore (2014) each served over 16 years in prison for unrelated murders they committed as teens. BMe recognized each as BMe Leaders within 2 year of their release - sooner than anyone else. And BMe was right about them.

By 2016, Wilson was named 40-Under-40 by the Baltimore Business Journal and Senghor's life story was told by Oprah and he became a New York Times bestselling author and activist. That year, both men were invited to the White House to receive the President's Voluntary Service Award along with 60 different BMe Leaders.

Apply or nominate someone at www.BMeCommunity.org today.

BMe Community is a movement inspired by black men to build a more caring and prosperous America together. Since 2013 BMe’s 40,000 subscribers have helped themselves and 2-million others to improve their health, wealth, hope and communities.