Our Voices Matter --- We See You: Confronting the Adversity in Diversity 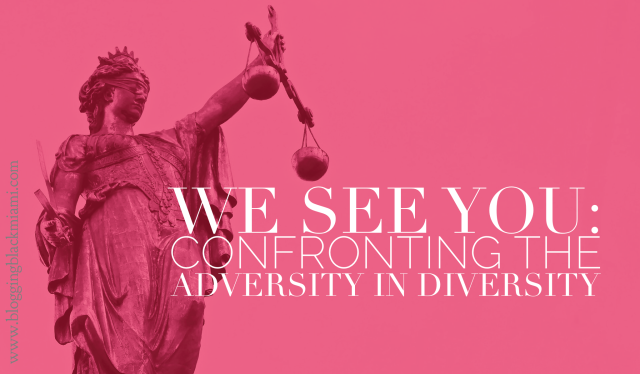 Diversity in its definition is the inclusion of different types of people, such as people of different races, cultures, religion, groups and organizations. The idea of diversity is to create a world of different communities with different ideas and ideologies while at the same time creating equality of opportunities for all people regardless of their differences. The reality of diversity is a constitutional claim penned on pages of legally documented affirmations that ensures all are allowed a piece of the shared equity of education, employment, economics, etc... We hold these truths to be self-evident that all men are created equal, that they are endowed by their Creator (that would be God, not man) with certain unalienable Rights, that among these are Life, Liberty and the Pursuit of Happiness... Now, this Declaration of Independence sounds good, but in reality, the implementation of this is conclusively prejudiced by the injustices that are often experienced by those whose skin pigmentations do not measure up to a racist status quo.

The adversity that I see in diversity is deeply rooted in the soil of the color code that gives negative life to the Color Conflict, the Color Consciousness and the Color Compromise. However, it is only the ideological ignorance that is embedded within the White Master mindset that believes that they alone can legislate without compromised prejudices, that which is best for dark-skinned people. When it comes to policy making, politics must not rule the roles of who is qualified and who is not. Racism in a robe and on the bench is a scary concept to people of color because public record proves over and over again that Black people don’t always get a fair shake. Diversity takes guts, but when there exists no guilty conscious concerning ruling right and fair regardless of race, the resistance will thicken and ultimately erupts in ways that are not always the best route for a community. Diversity is a beautiful thing if it stays away from the ugliness of racial disparity and dysfunction.

If the judicial bench in Miami-Dade County remains White in dominance, then diversity and equality become a false reality that is a premeditated lie that poisons the created intention of God for equal sharing in voice, vote and visibility. It is amazing that in most of the major sports, the bench is more white and the main players are black. In governance on every level of the judiciary, the bench is more white and the players who predominately face these judges are black in skin color. The difference between the two is that sports are a game, but the judiciary is no game, it is the most influential force and source of power in a city, state or nation. It determines the destiny of people who are pronged to do wrong by the nature of the human proclivity and in other cases their fall into human depravity.

It takes moral, ethical restraint, and discipline not to be a racist, because it is a generational disease that continues to reproduce itself from one generation to another. It is only the unethical excuses of those who choose to ignore its high level of systemic existence that allow this malfeasance to continue to escape without evacuation and execution. I will conclude this writing but definitely not this conversation by saying the following. Every White person is not a racist and every Black person is not a criminal and a source of unqualified judicial competence. The system must be racially fair, if not it is a false representation of the Constitution of The United States and to those of us who believe in God, it is a contradiction of his created intentions for the human race. Slavery is not dead. It has been redefined and redesigned through the process of a cosmetic application and corrupt camouflaging. We see you! We are committed to exposing the false idea that there is shared equity in education, employment, and economics.

I am a proud African-American man. I am pro-truth. I believe that we have qualified Black Men and Women throughout the state of Florida who can bear the competence, integrity and fairness that are mandated for those who sit on the Judicial Bench. My challenge to you is that we become true change makers and begin to make the right changes, not just for the sake of diversity but for the sake of human decency and fairness. #Ihateracism.

Carlos L. Malone, Sr. is Founder/CEO of Rhema Apostolic International Network (R.A.I.N.), an apostolic training network. He is the author and publisher of several books and his recent book, ME, Your Life Transformation and Empowerment Guide, which is the first published and printed book under his own publishing company FireHeart Publishing.

Apostle Malone recently celebrated his 28th anniversary as the Servant Leader of The Bethel Church Miami and resides with his wife, Pamala, in Miami Florida.