CALL TO ACTION: Murder of Markeis McGlockton and Florida's Stand Your Ground Law 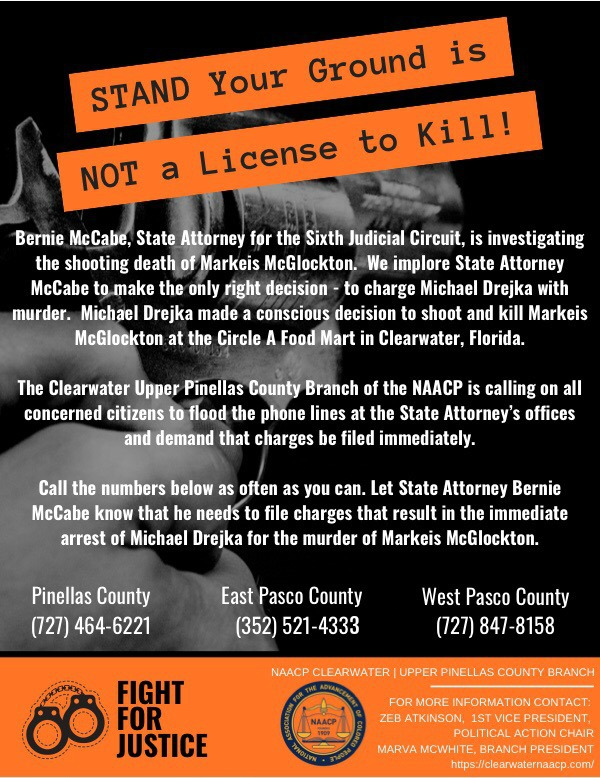 BALTIMORE  — The NAACP Florida State Conference calls on the U.S. Department of Justice to open an immediate investigation and immediately intervene into the murder of Markeis McGlockton.

“We know the misapplication of this horrendous idea of a law of standing your ground was an excuse to allow George Zimmerman to get away with murdering a young Trayvon Martin; and now it’s being used as an excuse for the murder of Markeis McGlockton –a loving father who only sought to defend his family,” said NAACP Chairman and Florida native Leon W. Russell.

The alleged killer, Michael Drejka, was not arrested or charged by Pinellas Sheriff Bob Gualtieri based on the Sheriff’s acceptance of his claim of the right to kill McGlockton according to the “Stand Your Ground” law. The case has been referred to the State’s Attorney who will determine whether Drejka’s excuse for murder will be accepted or if he will be charged? Regardless of the State Attorneys decision, the National Office of the NAACP joined the NAACP Florida State Conference and the NAACP Clearwater, Florida Branch in demanding the Department of Justice step in and investigates this killing.

“In cases like this, where local law enforcement fails to protect its citizens equally, it is the duty of the Department of Justice to step in and provide those protections,” said NAACP President and CEO Derrick Johnson. “We call on Jeff Sessions to do his job and to forcefully and clearly counter the growing attitude among many that its open season on Black lives.”

The Florida NAACP has continued to monitor the case and stand firm in its call for justice.  “This law must be changed. How many more black men and women have to die based on this inhumane law.” said Adora Obi Nweze, NAACP Florida State Conference President and National Board member.

“We’ve got to fight back against this law, it’s basically a license to target and kill Black people,” said Marva McWhite, NAACP Clearwater Branch President.

The NAACP will participate in a rally on Sunday against the killing that features the Rev. Al Sharpton.