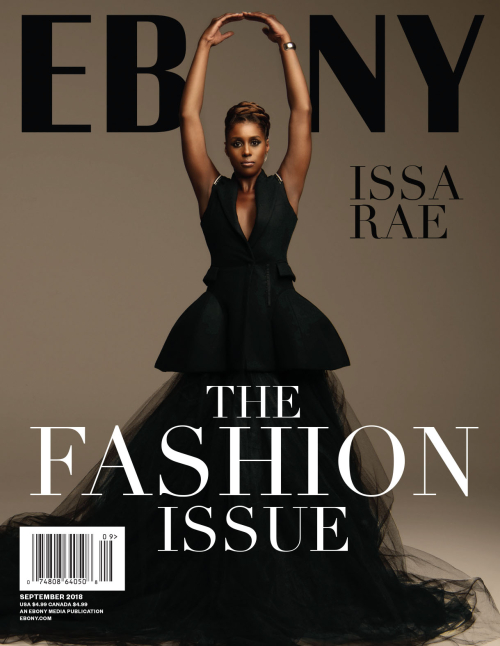 EBONY magazine releases its Fashion issue, featuring ISSA RAE on the cover. In the accompanying exclusive interview, EBONY has an intimate conversation with the producer and Emmy Award-nominated actor who took her award-winning web series, The Misadventures of Awkward Black Girl, and grew it into a media empire, which includes Rae’s HBO hit series, Insecure. She also dishes on her determination to dispel the misconception that Black women can’t be weak.

“The ability to be vulnerable with your sisters and friends is so crucial and kind of outweighs the strong Black women narrative. I’m not saying that’s a bad thing. It’s just you can’t be that all the time,” says Rae.

In addition to the cover story, the Fashion issue also features the 2017–2018 EBONY HBCU Queens, who have royally demonstrated the ability to inspire, lead and give back to their communities. Readers will also get a glimpse at the latest in high-end streetwear; learn how to get Donald Glover’s fashionable look; actor Derek Luke dishes on his role in 13 Reasons Why and the importance of mental health awareness; and the Fall beauty roundup is filled with ’90s hair and makeup trends.

“The Fashion issue is all about providing a platform to showcase and celebrate the current Black players in the fashion world, whether seasoned or up-and-coming. For so long, Black people didn’t have a place to be recognized for their creativity and individuality—and EBONY is happy to provide this opportunity,” says Linda Johnson Rice, chairman emeritus of EBONY Media Operations. “This issue also celebrates young Black talent, like Issa Rae, who is breaking boundaries and empowering other women and people of color to jump feet first into the entertainment world.”

Get the September 2018 digital edition of EBONY via Texture, Google Play, Apple iTunes and Kindle now and on newsstands August 21. For more with Rae and behind-the-scenes content, visit ebony.com/InsideEbony.