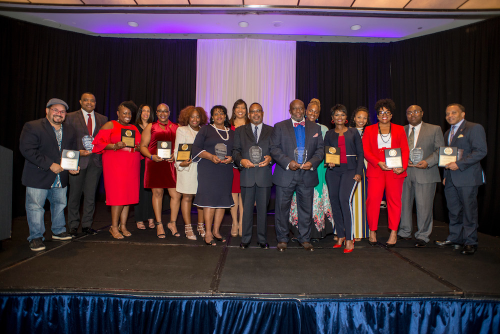 MIAMI – It’s not often that you’ll hear a faith-based economist quoting the rapper Drake or have the opportunity to sit in a room filled with 150 of South Florida’s most talented black media professionals, but that’s exactly what happened Thursday, September 20, at 11 a.m. when the Black Owned Media Alliance (BOMA) held the Second Annual BOMA Awards at Miami’s Hilton Airport Hotel.

Experts from various aspects of the industry came together to honor the multi-talented individuals who have dedicated their careers to not only authentically telling the African Diaspora’s stories, but also creating economic opportunities to build its wealth and strengthen its core.

WMBM’s Debra Toomer served as the Mistress of Ceremony and Dr. Lance McCarthy – a nationally recognized Faith-Based Economist and Investment Advisor with a specialty in Urban Development – delivered the keynote.

After giving some staggering statistics, McCarthy challenged the audience to implement the 3Cs of consciousness, currency and communications to enrich the Black community.

“We’ve had the DNA of black business owners since the beginning of time. We know black history, but not black business history. …We don’t need any more programs, we need projects. How do we put information out there continuously on black wealth? How do we create a platform to be able to move our agenda forward,” McCarthy asked.

Bridgeman said the organization was created in 2015 to address the disparity that exists in South Florida for black-owned media outlets when it comes to receiving viable economic and financial opportunities.