Blogging Black Miami
Miami Kappas Get Out the Vote Saturday 10/27
Souls to the Polls Sunday! Last Day to Vote Early! 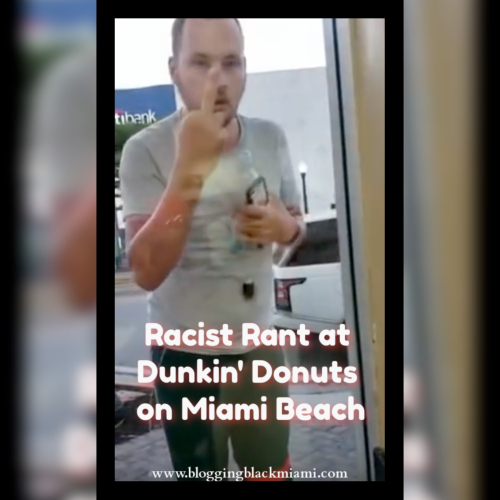 A video was posted to YouTube two days ago showing a white male customer hurling profanity and racial slurs at a young Black female employee of Dunkin Donuts/Baskin Robbins at 341 W 41 Street (Arthur Godfrey Road and Sheridan Avenue) on Miami Beach, Florida. The video was posted by Veronica Timpanaro.

Apparently, the male customer was upset that he was not served as soon as he entered the store. The lone employee was serving a female customer and a young child but that did not matter to him. It was bad enough that he exhibited such disgusting behavior, but he also did it in the presence of a young child.

When he couldn't have his way after dropping f-bombs, he proceeded to drop n-bombs at the employee, threatened her and even called her a coon. He's a really classy guy. There's a very clear picture of his face and him throwing up his middle finger. Prayerfully, social media will work its magic and identify him. Then, the Miami Beach Police need to arrest him for disorderly conduct, ethnic intimidation and other charges.