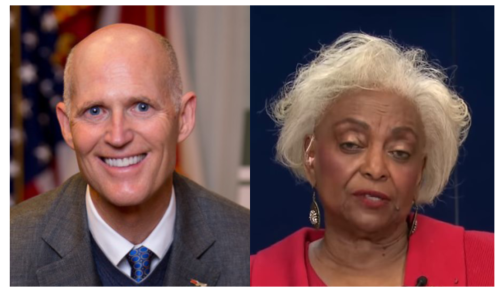 Scott could have allowed Snipes to leave her position quietly, but no. Snipes has not been publicly humiliated enough for him; Scott wants her punished. During the midterm elections, Snipes became the face of election fraud, corruption and incompetence depending on to whom one spoke. After Scott quickly accused Snipes of fraud, without any proof, Republicans, the far right and some Democrats called for her to be jailed or fired. Snipes was accused of sabotaging Senator Bill Nelson, whom Scott defeated, and also being a double agent working for the Republicans.

Dr. Snipes and her legal team held a press conference yesterday. It was attended by a few black elected officials, some black ministers and several black women dressed in red as identified by mainstream media. For the record, the ladies in red and Snipes are members of Delta Sigma Theta, a black Greek-letter sorority. During the press conference, attorneys Burnadette Norris-Weeks and Michelle Austin Pamies refuted the claims outlined in Gov. Scott’s executive order. The suspension of Dr. Brenda Snipes is on the verge of becoming a one-dimensional racial issue when it is that and more. The suspension of Brenda Snipes is a power play. For whatever reason, white critics of Gov. Scott’s executive order were conspicuously missing.

Not condoning any missteps by Snipes and her staff, recognize what’s at play by targeting her and heavily-Democratic Broward County. The new Broward SOE has the power to easily suppress the vote just in time to deliver Florida and the presidential election to Donald Trump and other down-ballot Republicans in 2020. The SOE determines the early voting sites, hours, precinct staffing, etc.

Lest we forget, Dr. Brenda Snipes was appointed SOE in November 2003 by then Gov. Jeb Bush. She was subsequently elected in 2004 and overwhelmingly re-elected in 2008, 2012 and 2016. Does Gov. Scott not respect for the will of the people of Broward County? If the people were not satisfied with her performance, there were several opportunities to elect one of her opponents. As a candidate on the ballot, Scott really should not have made the inflammatory and potentially slanderous statements about her.

The immediate suspension of Dr. Snipes by Gov. Scott placed the final decision on her removal from office on the agenda of the Florida Senate and prolonging this unpleasant situation. Gov. Scott’s decision to suspend Dr. Snipes after she had already submitted her resignation demonstrates poor leadership. Suspending Dr. Snipes and withholding her pay is the height of pettiness and maliciousness.