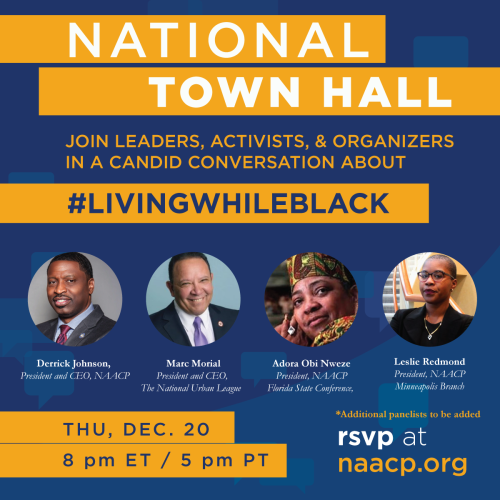 BALTIMORE (December 19, 2018) – NAACP will host its final national tele townhall of the year on Thursday, December 20that 8 pm EST. The townhall is an opportunity to have a candid conversation about #livingwhileblack, what we learned from this year’s elections, the shifting political climate, and the work before us in 2019. Panelists will also speak on NAACP’s #LogOutFacebook protest and the passage of the prison and sentencing reform bill.

Thousands of listeners may participate in the call which will discuss #livingwhileblack, the 2018 midterm elections, the current status of the themes expressed in NAACP’s poll about voter attitudes, the political climate and what lies ahead in 2019 for the Association.

“From organizing historic turnout for voters of color to fighting back against problematic judicial nominations, we made incredible progress on the road to turning America into a country that is equal and just for all of its people,” said Derrick Johnson, NAACP President and CEO. “However, there is still much work ahead fo us, and resistance remains high, we must use our collective power and voices to express our concerns and ensure our future stake in this country.”

Interested participants and media can RSVP for the event here.